The Info War Is On, And Alex Jones Is Beating Megyn Kelly 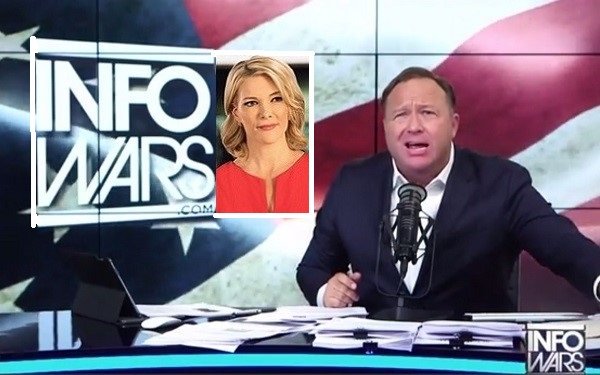 An information war is being waged by conspiracy theorist Alex Jones against Megyn Kelly and NBC News, and Jones is winning.

At least that seemed to be the case on Friday morning as reports circulated that Jones surreptitiously tape-recorded conversations he had with Kelly before they sat down to videotape the interview that she conducted for this weekend's edition of her new NBC News show “Sunday Night With Megyn Kelly.”

He also reportedly had a recording device going during their interview in an effort to capture the audio from all the parts of the interview that wouldn't make it on the air. He has now posted portions from these recordings on the media he controls, including a YouTube channel and his self-styled Web site called Infowars.com.

According to reports, some of the recordings have Megyn assuring Jones that the story she plans to do based on their interview won't be a “gotcha hit piece.” You can guess from this that she was in the process of cajoling her subject to agree to the interview. This Daily Beast story provides a great rundown of what Kelly said to persuade Jones to agree to an interview.

Whether or not the story that is still scheduled for Sunday is a hit piece will not be known to all of us news viewers at home until the thing airs. But this strategy -- of making an interview subject feel comfortable by reassuring him or her with promises that may or may not be kept -- is not uncommon. It might not be totally honest, but it is what newspeople do.

In case you have not been following this story sufficiently this week, this interview with Jones has gotten Kelly into hot water because many of Jones’ opinions are objectionable to many people (to say the least).

He is a conspiracy theorist with an apparently sizable following who expounds on alternative scenarios for just about anything -- 9/11 was planned by the U.S. government, for example; that same government has a secret plan for turning people gay, according to one report about Jones; and the issue that angered everyone this week, his belief that the Sandy Hook Elementary School massacre was a hoax.

After a promo of Kelly interviewing Jones was released earlier this week, at least one major advertiser, JPMorgan Chase, announced it would not advertise during Sunday's show. There has been no discernible stampede of copycats dropping out the show in the wake of JPMorgan's announcement, however.

The problem is that this Sunday's show is only Kelly's third one since she came to NBC. This week's tumult, coupled with decidedly tepid reviews for her debut episode on June 4 (the one that featured her kindergarten-level interview with Vladimir Putin), is already generating headlines and Twitter tweets about the possibility of buyer's remorse settling in at NBC News over their new, high-profile hire.

If I may venture an opinion here, this is what's wrong: It is not a problem of Megyn Kelly not being up to the task of making this transition from the role she played on Fox News Channel to this new role as a network news-magazine headliner.

The problem is inept communication where the positioning and publicizing of this story on Alex Jones is concerned. I sensed this instinctually when the story first started to catch fire earlier this week. Why? Because I have been on the receiving end of communications from TV publicists for 30 years and without question, this profession is in crisis.

You would not believe the poor quality of the communications I receive in my email inbox every day from the TV industry's p.r. apparatus, although I would also like to emphasize that most of it is competent.

But enough of it is so lacking in basic background information, context, and even correct grammar and spelling that I have come to the conclusion that for many TV companies, their publicity departments are like forgotten orphans who are made to reside out of sight and out of mind in some sort of airless corporate attic where they then receive no guidance.

As I understand this Alex Jones story, it was (or should have been) a quest to shed light on this seemingly fringe, right-wing conspiracy theorist who the current president has actually praised, even while most of us regard people like Jones as loons. So the story was to pursue the angle that President Trump might actually agree with the far-out views espoused by Jones.

Instead, the story was positioned as a straight-up interview with Jones, as if Megyn Kelly intended to profile him in such a way that would elevate and burnish his profile -- like he's George Clooney instead of some Internet nut.

In the past, we journalists on the TV beat would have received full descriptions and sample quotes from news segments such as these in advance of the show. There was a time when there was never this kind of doubt about what a story on a TV news magazine show would be about. The view from here is that NBC News has no publicity plan for Megyn Kelly, as if this crucial element in her development there has been deemed unnecessary. I’m here to tell you: It is necessary. All NBC News has to do is find someone who knows how to do it.

news, tv
2 comments about "The Info War Is On, And Alex Jones Is Beating Megyn Kelly".
Check to receive email when comments are posted.
Read more comments >
Next story loading