Sitting in a dark theater in Vancouver, I found the excitement palpable. There were robots. Spry, agile, seemingly conscious. 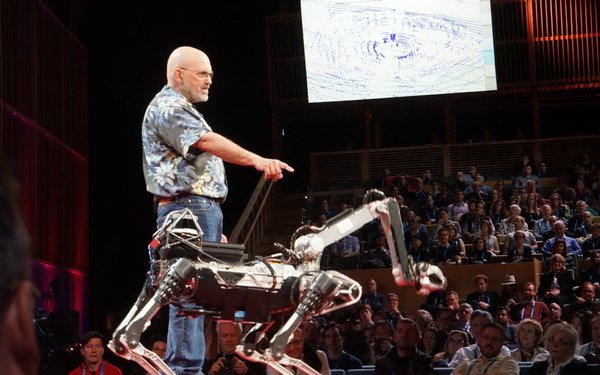 After Marc Raibert’s TED talk, I found myself drawn to a crowd gathering outside the theater. I wanted a selfie. But not with Raibert. I wanted a selfie with SpotMini, an electronic, quadruped robot that looks like a cross between a large dog and a small giraffe. He was cute, almost cuddly. And, with just a dash of sci-fi imagination, terrifying.

At that moment, Google-owned Boston Dynamics, the robot factory responsible for BigDog, Atlas, Spot and SpotMini. But already the rumors were swirling: Google wanted out.

Now we know that there’s been a deal done. And Raibert and his stable of robots are now owned by SoftBank, the Japanese technology conglomerate. The sale price isn’t being disclosed, but as the purchase price wasn’t made public, we can only guess that the deal wasn’t a big win for Google. Back in 2013 when Google purchased Raibert’s Robot co, it was already a bit wary of the Boston Dynamics business, cautioning that while it would honor the latter’s existing Department of Defense existing contract, it didn’t want to become a military contractor.

So Google knows what it doesn’t want to be. But don’t count Google out of the hardware business; far from it.

Today, there is a pitched battle being fought among Amazon Alexa, Apple HomePod, and Google Home. Each company with its own device, its own ecosystem, and its own critically important endgame.

The so-called “smart speakers” are always listening for their wake word, waiting to play a song or provide some other sort of e-commerce function. Think of them as the new front door to the emerging electronic economy.

So, I thought it might make sense to review the three platforms and make some educated guesses about the future of the emerging home voice tech space.

Amazon was first, with its Alexa assistant in the Echo, Dot and Tap. But by allowing third-party device makers to have access, it has gotten an early foothold that it’s building upon.

Then Google Home came along with strong voice-recognition solutions but missing some of the interconnectability that has given Alexa an edge.

Now Apple has unveiled HomePod. It’s got great sound, and a stylish look but the jury is out until there’s an actual demo unit we can get our hands on.

But once you’ve allowed an “always aware” robot into your home, what will that artificial intelligent device allow you to do? It turns out it depends which network you’re connected to. And, it also depends how much your home is tied to the IoT world of connected devices. That’s where the magic starts.

Alexa ties to your Amazon Prime account, which you access to get all the associated music, movies, and apps, many of which come from outside the Amazon network of owned and operated services. So you can hail an Uber, for example. And Alexa is surprisingly open in terms of smart-home devices, and easy to set up.

Google Home links into Google’s suite of apps, including Google Play. And ties to Nest appliances so you can set the temperature in your house with a voice command. Google lists partnerships with Samsung SmartThings, IFTTT, and Philips in the IoT space — for now. The Home also supports Chromecast so you can ask it to bring up Netflix on your TV, which is pretty cool.

Apple HomePod is — for now — focused on Apple Music. And while it’s not yet released, it’s scheduled to come out for Christmas 2017. If you have a lot of HomeKit devices, HomePod will act as a hub.

But one thing is very clear: Home automation and audio-enabled AI are the new front lines in the war to own the consumer. What’s unfortunate is that Apple, Alexa, and Google all have distinct strengths and weaknesses. And it’s shaping up to be a winner-take-all battle.

In my home, we’ve been Alexa users for more than a year. Turning on and off lights, changing internet radio stations, changing the volume. But we’ve never used Alexa to buy anything from Amazon, which is clearly the end game win for the Amazon ecosystem. Don’t get me wrong, we buy plenty from Amazon Prime, but we use a desktop computer and often comparison shop before we place an order. That’s a behavior Amazon would like to change.

That’s why Dash Wand might be the sleeper hit of the summer for IoT.

The Amazon Dash Wand is a handheld barcode scanner that integrates with Alexa. Just press the button and speak or scan a barcode. The device is water resistant and magnetic.

If I can try, for a moment, to get inside the head of Jeff Bezos, what he and the Amazon team are thinking may be this: “We don’t know how people want to integrate ordering of household staples into their lives so we’re giving them lots of options, and we’ll see what consumers want.” For that reason, the nifty Dash Wand is $20, with a $20 credit to your Prime account. So it’s essentially free. That’s pretty darn smart.

Two cautionary points here. First, the reviews of Dash Wand on Amazon aren’t great — lots of folks having challenges getting it set up, and it’s now listed as sold out so maybe there’s some new software on the way. Amazon has had early product challenges, but mostly seems to work through them so maybe hold off on buying Dash Wand until 2.0 comes out.

Secondly, if you want to know just how important first-mover advantage is in the emerging home voice space, here’s what I learned. I tried to add a Google Home to my Alexa environment. I didn’t need them to interact, just live in peace and harmony. No such luck. Two home voice robots is one too many. Confusing, hard to keep sorted which one does what and, frankly, not worth the headache. So for now, Google Home is back in its box.