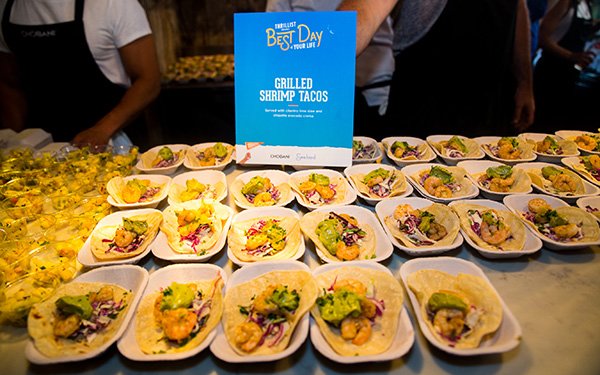 Best known for its food, drink and entertainment recommendations, online lifestyle site Thrillist held its fifth Best Day of Your Life event on June 17 in Greenwich Village, where about 800 attendees participated in a food-and-drink crawl across 16 establishments in the neighborhood.

Thrillist hosts the annual event on the longest Saturday of the year in a different neighborhood. It has previously hit the East Village and the Lower East Side and last year the event took place in Williamsburg.

Chobani hosted an event at Seabird, with yogurt-infused tacos and bites of salmon. Frank’s RedHot sponsored spicy chicken wings at Down the Hatch, Ballast Point provided beer at GMT, onion rings and pizza bites were served alongside some much-needed Tums at 3 Sheets Saloon and Sanpellegrino offered spiked popsicle cocktails at AOC.

One of the biggest draws of the crawl this year was likely its access to Do, a cookie-dough hot spot that usually requires waiting in a two-hour line to step foot inside.

The 16 establishments were mostly closed to the public, or had a specific area of the restaurant or bar designated to the event’s attendees. The places chosen are “areas where young people are spending their time,” Jonathan Smolin, publisher of Thrillist, told Publishers Daily, such as “cool mom-and-pop places and places crucial to that area and makes that area unique.”

Despite a torrential summer downpour, Best Day of Your Life attendees armed with plastic ponchos and umbrellas hopped from one establishment to the next, choosing which spots to hit and in what order in the four allotted hours.

Tickets to the event cost between $65 and $75 and were sold out by Saturday.

A pass on a lanyard with a map and list of stops gave attendees access to each establishment, as well as a lively after party at Le Poisson Rouge, with a performance by Holy Ghost!. Smolin calls Best Day Of Your Life “Thrillist in real life.”

The event helps the publication “connect deeper with the audience because they can engage with our brand beyond just our recommendations,” he notes, as well as connect advertisers to that audience.

Smolin said the event’s attendees and staff walk the neighborhood with branded lanyards, bags and T-shirts to highlight the even tot he public. This is the second year Sanpellegrino has signed on as a sponsor of Best Day Of Your Life.

Katie Schiavone, senior brand manager of Italian brands at Nestlé Waters North America, the parent company of Sanpellegrino, said the company decided to come back as a partner after a “historical performance” last year. "Thrillist and BDOYL align with our millennial target in our key geographic area of New York.”

Thrillist puts on about 50 different custom events each year.