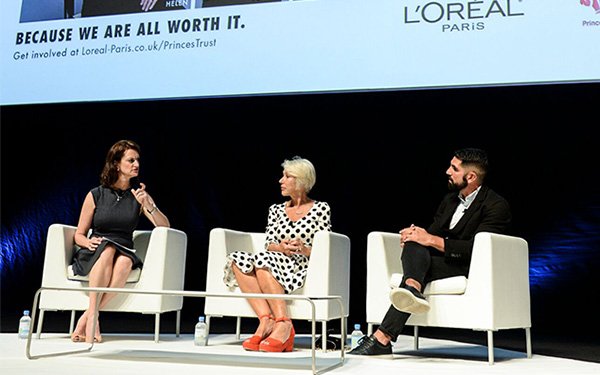 L'Oreal Paris is raising awareness of its partnership with the Prince's Trust in the UK by changing its iconic tagline "Because I’m Worth It" to "Because We Are All Worth It."

During the Cannes Lions Festival of Creativity on Wednesday, Adrien Koskas of L'Oreal Paris joined Helen Mirren, Oscar-winning actress/L'Oreal spokesperson, and moderator Suzanne Powers of McCann Worldwide to highlight how the beauty brand is using its platform to support diversity and inclusion.

Diversity is not a trend because it is a cool thing to do right now, says Koskas. "What is important for us is to really walk the talk. You need to put acts behind it."

Consumers are tired of a beautiful girl walking around swishing her hair, says Koskas. We are the No. 1 beauty brand in the world. We need to lead by example. "If we don't do it, then who will?"

According to the company, L'Oreal Paris's partnership with UK charitable organization The Prince's Trust and McCann Worldwide illustrates commitment to real change. The program kicked off in February with 15 ambassadors, including Mirren, who shared their stories in a series of films that document how they have been affected by self-doubt.

The alliance is hosting workshops across the UK for 16-25-year-olds to transform self-doubt into self-worth. These confidence sessions address issues such as body language, relationships and employability, including techniques to help them prepare for interviews.

In addition to 18 physical centers, the campaign will connect with more young adults and teens through online mentoring and coaching. Koskas reports that more than 100 teens have already attended the program with the goal to reach 100,000 in the next three years.

"We are just at the beginning," says Koskas. "This is a life transformative experience."