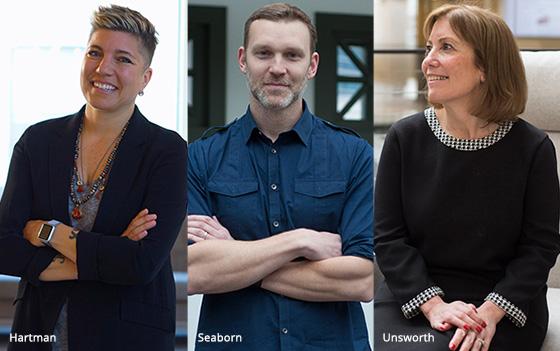 The 20-year industry veteran began her career at Arnold in the ‘90s working on the Volkswagen “Drivers wanted” campaign. She then went to Hill Holliday, where she ran the Dunkin’ Donuts business and helped lead the Liberty Mutual account before returning to Arnold to spearhead marketing for CenturyLink.

In her new role, Hartman will be tasked with overseeing the Boston client portfolio and enhancing the overall client experience. As part of her charge, she will also lead the Marketing department in Boston.

Elliott Seaborn, formerly managing director, Boston, has been named chief growth officer for Arnold’s North American operations. Prior to joining Arnold in 2011 to co-lead the marketing function, Seaborn spent nearly a decade at Digitas, overseeing clients including some of the largest pieces of the General Motors account. In his new role

Seaborn will lead business and brand development for the agency. He will be tasked with stewarding Arnold’s brand reputation.In addition, he will refine and develop capabilities and service models.

Lisa Unsworth, managing partner, CMO, whose tenure with Arnold began in 1998, has been appointed managing director, director of growth platforms for North America. Unsworth began her career at Saatchi & Saatchi working on a range of CPG assignments for P&G and General Mills. She then moved to Houston Herstek Favat, where she was ultimately named agency president.

In her new role, Unsworth will provide executive marketing leadership across several Arnold clients and serve as a growth advisor across the agency’s entire portfolio, bringing new platforms and capabilities to current clients. In addition, she will drive expanded integration opportunities between Arnold, Havas Village Boston entities and the broader Havas network.