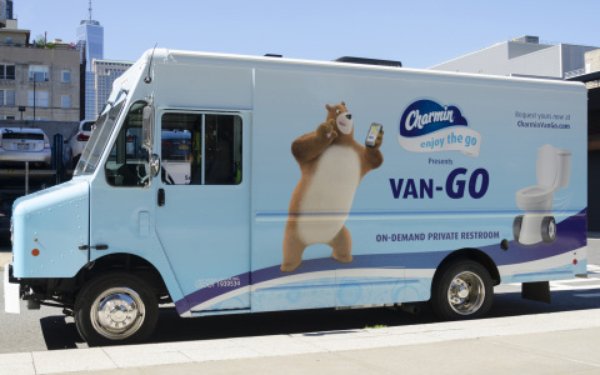 It's widely accepted that a bear does its business in the woods. But with no woods around, wayward New Yorkers and NYC tourists may have trouble finding an acceptable bathroom in a time of need.

Enter Charmin and it’s portable “Van-Go” bathroom, which, like an Uber, can be summoned directly to one's location in New York City.

“Almost everything can be delivered to your door [these days],” but you can’t get a restroom delivered,” Angie McAuliffe, family care communications associate manager at Procter & Gamble, tells Marketing Daily. “This can meet you wherever you are.”

Those wishing to have a restroom delivered can log onto a microsite, CharminVanGo.com, and request the van. The driver will confirm the request and give an estimated time of arrival. (So, plan accordingly, McAuliffe advises.) The van is only available, however, in a few NYC neighborhoods, such as Columbus Circle and Bryant Park (on the 21st)  and Lincoln Center, Rockefeller Plaza and Union Square (on the 25th).

The two-day promotional effort is an outgrowth (sort of) of a previous effort, in which Charmin erected free, clean restrooms in Times Square. That promotion ran from 2006 through 2010.

For the current promotion, the brand has enlisted “Black-ish” star Anthony Anderson to help ease the potential embarrassment of summoning a toilet for one’s use. “When I learned about Charmin Van-Go, my first thought was, ‘Wow. New York City needs this!’ There have been too many times I’ve been on the go but couldn’t find a clean and convenient bathroom,” Anderson said in a statement.

Charmin's "Van-Go," is currently slated only for a two-day New York City promo. (Why two days? “Number 2 is our favorite number,” she says.). While other cities aren’t currently planned, the possibility is always there, McAuliffe says.