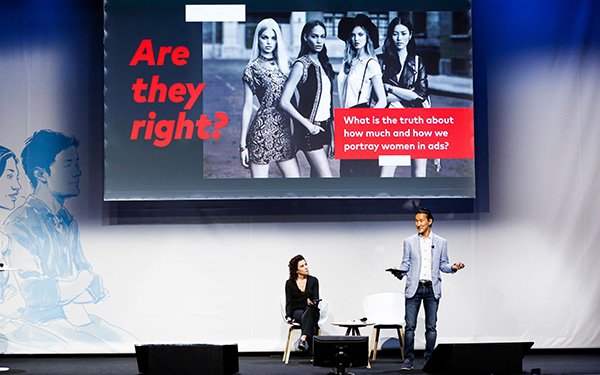 CANNES, FRANCE -- The advertising industry has certain “tent-pole moments” with amazing campaigns that rally around women, but when it comes to creating ‘regular’ ads for ‘regular’ clients, advertisers forget about them, said Brent Choi, chief creative officer, J. Walter Thompson New York at a Cannes Festival session on Wednesday.

A JWT study last year found that “85% of women said that when it comes to representing them, the advertising world needs to catch up with the real world," Choi added.

The agency teamed up with The Geena Davis Institute on Gender in Media at Mount Saint Mary’s University and the University of Southern California’s Viterbi School of Engineering to analyze audio and video content from Cannes Lions’ film and film craft shortlists and winners from 2006 to 2016. (The data only tracked English-speaking films.)

Overall, men are present on screen more than women across all ad categories. Men also dominate the measurements of female representation in commercials, including the number of characters, time on screen, and speaking time.

The data has led many to conclude that nothing has changed over the past decade.

“It's not enough to portray more women. We need a more progressive and inclusive representation of women," says Madeline Di Nonno, CEO, Geena Davis Institute on Gender in Media, who spoke at the Cannes session with Choi. "By changing the narrative, the images we use, the stories we tell about women, we can dramatically change the way the world values women and how women and girls see themselves."

“Technology advances in data sciences and machine learning give us new ways of shining light on media content, at scale and with an unprecedented level of detail and accuracy," says Shri Narayanan, Niki & C. L. Max Nikias Chair in Engineering, University of Southern California. "It can give us novel insights not just by eliminating the mystery about potential unconscious biases in content but in offering objective tools to shape content."

Research conducted by the Davis Institute and USC used techniques that incorporated machine learning and audio-visual processing technologies from Google and the university to calculate and compare character gender, screen time, speaking time, and language usage.