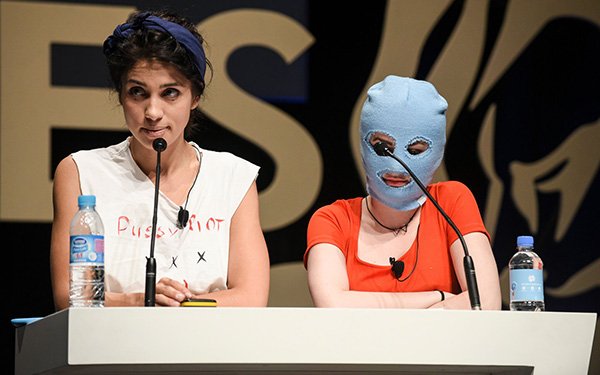 CANNES, FRANCE -- In one of the more amusing panels during the Cannes Lions Festival of Creativity, Grey New York's Alice Ericsson hosted members from the Russian punk rock advocacy group Pussy Riot for a master class in activism.

Pussy Riot's Nadya Tolokno was joined by fellow member Sasha, wearing a blue Balaclava to talk about their experiences as political and social-rights advocates.

Tolokno was one of two members who spent 21 months in a remote Russian prison after Russian president Vladimir Putin sentenced her for performing in an Orthodox Church. Believing that only, "vivid, illegal actions have a subtle power of showing that the king is naked," they now travel the world to support human rights.

"As a citizen of the world, I don't care about borders. But borders care about me," says Tolokno.

The two rockers provided their opinions on current events, including Tolokno proclaiming her belief that "Bernie Sanders will be the next president of the United States." She described Putin as a "tiny malicious KGB agent whose only mission is to steal more money from Russians."

The panelists encouraged everyone to stand up for their beliefs by telling audience members to challenge fascism by forgoing greed and celebrity worship. Also, that tweeting doesn't replace activism. You need to get out there and organize, they say. "Don't leave until your demands are met. Ours is a world of fear."

A male member of the group dismissed the thought that Putin influenced America's presidential election. "It is flattering to Putin," but it isn't "exactly the case." He hopes American media would realistically see the various sides of the issue rather than jump into "cold-blooded accusations."

The session ended with all members of the audience receiving their own face masks and poster boards in order to write a brief political statement for a group demonstration on stage. The messages from the attendees included “People over profit,” “Welcome refugees,” “We men are not objects,” “Education for all” and “Free the nipple.”

That last one "is one of my favorites," quipped Tolokno.