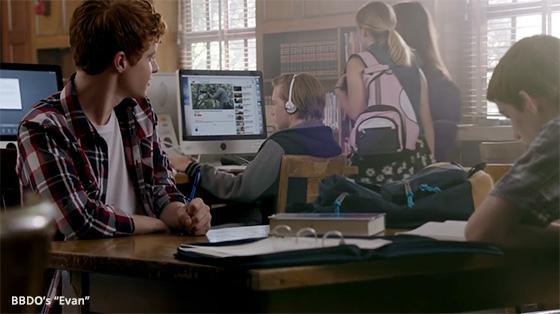 CANNES, FRANCE — Brands have the opportunity to do more than simply sell products. They can make meaningful connections about what really matters to consumers.

That was the message from BBDO CEO Andrew Robertson and Chief Creative Officer David Lubars in a session hosted by the agency at Cannes today.

Too many agencies and brands see pro bono projects as separate from their larger paid work, but it doesn't have to be this way, they say.

The first step is to create credible connections.

Procter & Gamble's Marc Prichard said during another Cannes presentation that the industry needs to recognize consumers not as buyers but as people. "Then you can connect that to your brand. Mass marketing to mass mattering," said Robertson.

BBDO produced "Evan,” a provocative ad for SandyHookPromise.org, that chronicled a student's crush on his classmate. The twist in this sweet story was that in every shot, there was an alienated classmate who was planning a school shooting.

The second step is to make sure the issue is focused. Don't say you want to do good for the environment. Instead, concentrate on specific causes, such as saving whales.

New Zealand beer DB Export, for instance, launched an advocacy campaign to highlight how two-thirds of beaches on the island nation are running out of sand. In order to save them, the beer company encouraged drinkers to recycle their bottles into branded machines that crushed them into sand.

Then DB Export distributed the Beer Bottle Sand to construction companies and anyone else who needed it.

Another BBDO project with AT&T produced "The Unseen," a attention-grabbing spot to raise awareness for distracted driving. As part of the It Can Wait series, this ad featured a young boy talking with a male driver, who turned out to be the one who killed him as he was looking down at his phone.