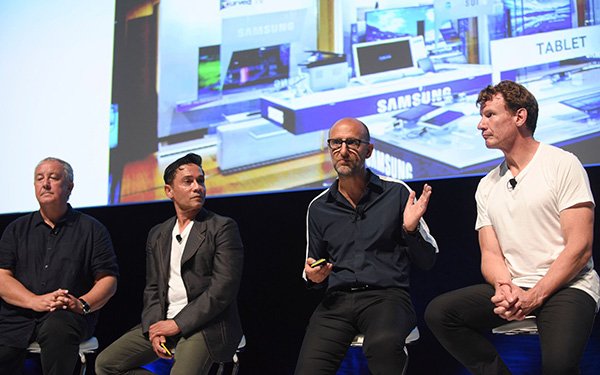 CANNES, FRANCE — It is easier to herd cats than to get agencies to work together. Yet two years ago, Pio Schunker joined Samsung with a vision to reshape the brand by creating a "team of rivals" with Leo Burnett, Turner Duckworth. R/GA, Ogilvy, and Cheil Worldwide.

"Sometimes, you have a take bold action when bold action is the last thing you want to do," says Schunker during a presentation at Cannes Thursday, featuring Leo Burnett's Mark Tutssel, Turner Duckworth's David Turner, R/GA's Nick Law, while Ogivily's Tham Khai Meng and Cheil Worldwide's Malcolm Poynton chimed in with pre-recorded videos.

At first, these agencies weren't excited about this collaboration.  Their basic attitude was You don't get to be the best in our field by compromising.

Samsung, however, appealed to them to be "something bigger than they all were."  According to Schunker, "This wasn't about just creating a great brand campaign, but creating a brand vision with a great product" along with an outstanding campaign.

Allowing agencies to develop their own concepts was like letting them loose in a toy store, said Tutssel, whose agency served as creative lead. "Everything looks different but similar."

Leo Burnett set the overall guidelines, including that Samsung's blue would regress into the background in favor of a bold black and white palate. The design principles were "bold, engineering, innovative and inviting," says Tutssel.

Leo Burnett directed the other agencies to channel "their energy into ideas rather than logos or typeface." The initial launch was widely successful. In one particularly challenging market, India, Samsung vastly improved brand metrics as result of the campaign.

Just when everything went right, it all went wrong.

Samsung's exploding batteries forced the company to issue massive recalls and hold press conferences. Samsung took a big hit on trust, reputation, positive sentiment and sales. "How would you feel?" asks Tutssel. "What would you do?"

Samsung and its team of agencies recovered by demonstrating the resiliency of the brand. They developed ads that illustrated the product process and people.

Then, agencies started work on the next edition S8 design. The phone design itself hadn't really changed, but the device's function evolved into becoming a content viewing machine.

Tutssel remembers November 2, 2016 vividly. "It was a blood bath." The agencies brought their strategy to the client who rejected everything. "All creative work died."

However, one little idea that didn't get killed was that the top and bottom edges of the phone resemble like brackets, says Tutssel. This glimmer was the only concept that proved to potentially have value. The agencies then went back to work to further expand on this insight. It worked. The brackets fueled the entire S8 campaign by freeing phones from being "[Confined]."

Samsung sought to find an iconic brand message similar to Nike's "Find Your Greatness." Rejected taglines included "Hello Progress," "Make Progress" and "Defy Barriers." "Once we shifted our focus to the consume,r we finally hit the nail on the head," says Tutssel. "Do what you can't."