WPP, Others Hit By Cyber Attack 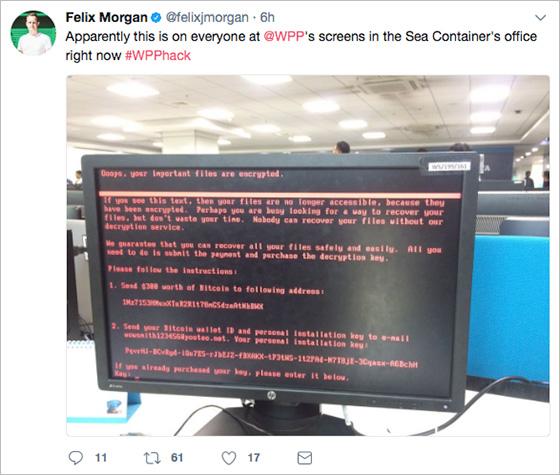 WPP was one of several companies confirming today that its computer systems have been attacked by cyber criminals.

The company issued a tweet at around 10 a.m. ET that read: “IT systems in several WPP companies have been affected by a suspected cyber attack. We are taking appropriate measures & will update asap.”

There was no update as of this posting. Reps had no further information, indicating that updates would be provided via Twitter.

Felix Morgan, a strategist at London-based agency Livity, posted a tweet on WPP’s Twitter page earlier (since taken down) with a picture of a computer with a ransomware note on it indicating: “Apparently this is on everyone at @WPP’s screens in the Sea Container's office right now #WPPhack.”

The Sea Container’s building is a massive hotel and office complex on London’s Thames River where WPP agencies are located.

But the attack wasn’t confined to WPP. The Wall Street Journal reported that Russian oil company Rosneft and shipping company Maersk were also hit by the hackers.

The attack also spread to the U.S., where Merck confirmed being a target of the attack as well.