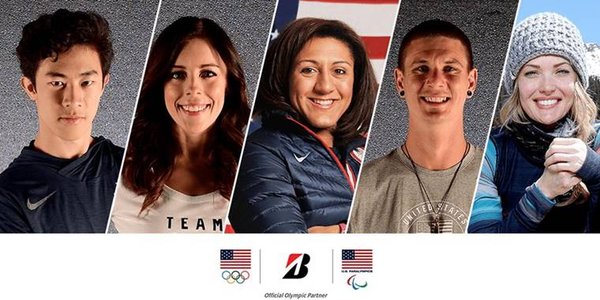 Bridgestone Tires has chosen five Team USA athletes on the road to the Olympic and Paralympic Winter Games PyeongChang 2018.

Team Bridgestone athletes are selected based on criteria related to the company’s core values, their personal stories, performance attributes and community involvement. Each athlete will receive financial support and access to cutting-edge Bridgestone products and technologies. As brand ambassadors, they also will participate in community, customer and employee activities leading up to and during next year’s games.

The athletes already have a combined five Olympic and Paralympic medals.

“These athletes embody what it means to ‘Be Bridgestone’,” said Gordon Knapp, CEO and president, Bridgestone Americas, Inc., in a release.  “They have a drive to be the best and a commitment to performance at the highest level.”

Knapp called the athletes “incredible people with stories of passion, determination and ingenuity.”

Bridgestone is a partner of the United States Olympic Committee and U.S. Paralympics through 2024. Bridgestone also became the first Founding Partner of the Olympic Channel in August 2016, signing a four-year agreement to support the groundbreaking digital platform.