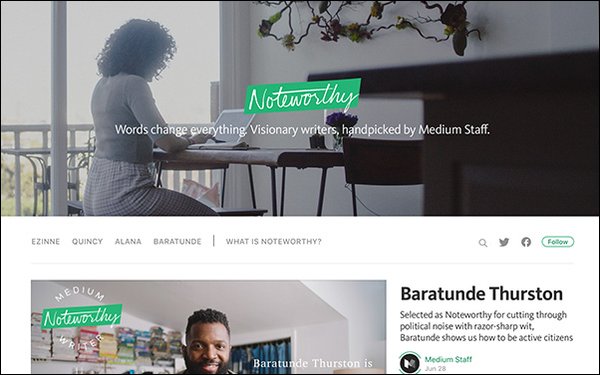 Digital publishing platform Mediumhas made its first move into original video with a series called "Noteworthy." Comedian and author Baratunde Thurston is the most recent star tapped for the series, which aims to highlight writers and storytellers.

In May, Sam Duboff, Medium’s head of product marketing, wrote in a post announcing the platform: “With 'Noteworthy,' we’ll introduce you to a selection of our favorite writers, experts, photographers, thinkers, activists, illustrators, journalists, videographers and storytellers.

"For each 'Noteworthy' writer, you’ll discover not only their stories, but also their ideas and motivations. Through a short film and a written profile, you’ll hear what inspires them, understand more about their background, and even see where they write.”

The videos are all under three minutes and accompanied by an article about the storyteller.

Duboff added: “We selected creators who reflect the diverse set of voices who thrive on Medium. They write on different topics with different styles, but they each have an authenticity, passion and expertise that has become synonymous with Medium.”

Baratunde, author of The New York Times bestseller "How to Be Black," will also publish a column available only for paying Medium members, called "Active Citizenship." Baratunde will record an audio version of each column for members available on Medium.com and its apps.

Medium announced in January it was discontinuing its advertising services and branded content efforts to build a new business model, laying off roughly one-third of its workforce.

In a site post at the time, founder and CEO Evan Williams criticized “that the broken system is ad-driven media on the internet. It simply doesn’t serve people. In fact, it’s not designed to. The vast majority of articles, videos and other ‘content’ we all consume on a daily basis is paid for – directly or indirectly – by corporations who are funding it in order to advance their goals.”

It is likely Medium hopes to increase its membership numbers to make up for lost ad revenue. Adding an original video series may make it more appealing to potential paying subscribers.

Spencer Somers, creative director at Standard Time, stated: “In brand marketing, we’re constantly reminded how great athletes and celebrities are. It’s rare to get an opportunity to put writers on a pedestal. 'Noteworthy,' as a content platform and film series, is our way of thanking them for what a huge impact they make in creative culture.”

In May, the platform launched with three writers handpicked by the Medium staff, including Alana Massey, Ezinne Ukoha and Quincy Larson.

Medium was created in 2012 by Williams, who is also the cofounder of Twitter.