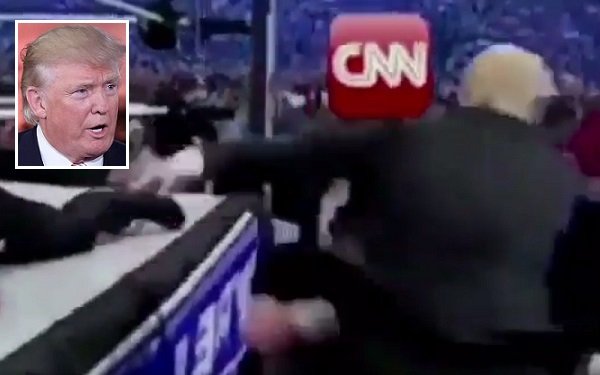 No sooner did we publish a headline for last Friday’s TV Blog that read “Trump’s War on TV News: It Gets Worse Every Day” than the situation actually did get worse, with Trump releasing a video of himself “tackling” CNN at a World Wrestling event.

In so doing, Trump melded current presidential politics with pro-, faux-wrestling, and rendered them one and the same.

However, it is doubtful Trump had that result in mind when he released his Trumped-up video doctored from a real-life appearance he made at a 2007 Wrestlemania event.

In the scene, which you can watch here, Trump was apparently cast in one of WWE’s storylines that had him physically attacking wrestling impresario Vince McMahon and pretending to punch his lights out.

If someone such as, say, John Oliver and his team had put this video together, then its satirical nature and intent would have been crystal clear.

But Trump used it, in all seriousness, to “communicate” his displeasure with either CNN alone or “all media.” It is hard to tell sometimes with tweets like these. Specificity in communications is not exactly a Trump hallmark.

For example, speaking to a veterans group Saturday at the Kennedy Center, Trump gloated once again about his victory in last November’s election.

The quote that got replayed on TV over the weekend was one in which Trump declared that his election was really a victory over the media, and not another candidate from the other party.

“But I'm president, and they’re not,” Trump said of the media. You half expected him to stick out his tongue at “the media.”

One wonders at times like these if Trump chooses these simple phrases carefully because he feels his base won't understand them otherwise, or he’s just a simpleton at heart himself.

In a way, the CNN-attack video was so wrong in so many ways that it was almost masterful because it stymied a critic's ability to comment on it. In that way, it renders critics speechless.

What is a critic supposed to say about it? That it's bad? That it's demeaning to the office of the presidency? That it's embarrassing when viewed from the standpoint of other countries? By now, heads of state in other countries must be forming the impression that the president of the United States is about as sane as Kim Jong-Un.

All of these critical statements are so obvious -- to everyone but Trump apparently -- that they hardly need saying. A critic cannot exactly cover new ground or come up with anything original or surprising to say about this tweet-video unless he or she chooses to actually come out in favor of it.

Speaking for myself, I have certainly played the contrarian often in my career as a TV/media critic, but I can see no benefit to somehow finding something good to say about this video.

CNN responded over the weekend with a statement that in its professionalism stood in stark contrast to the “communications” emanating from the current White House.

“It is a sad day when the president of the United States encourages violence against reporters,” the CNN statement said. “Instead of preparing for his overseas trip, his first meeting with Vladimir Putin, dealing with North Korea and working on his health care bill, he is instead involved in juvenile behavior far below the dignity of his office.”

It is a great statement -- as easy to understand as a Trump tweet, as a matter of fact.