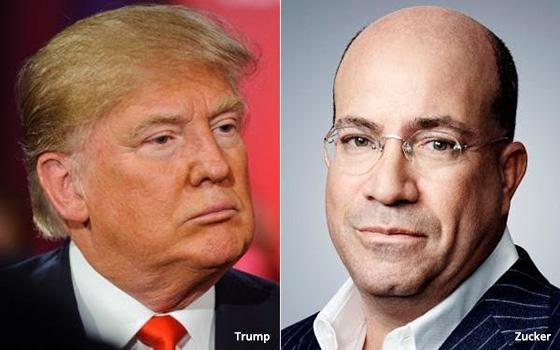 They're battening down the hatches and beefing up security at CNN in the wake of Donald Trump making a great deal of hay out of that video clip that showed him tackling a man with a CNN logo head.

You know the video. The TV Blog wrote on it yesterday. Trump -- the president of the United States -- was proud of this idiotic, grainy video in which his pre-presidential backside played a prominent role. Doesn't this just say it all about him?

For its part, CNN is not taking the threat of sudden tackles lightly. It is probably correct on the network's part to be wary of Trump fans suddenly rushing up to upend CNN journalists in the midst of doing their standups in the field.

The increased security news at CNN comes courtesy of The New York Times and the interview it posted Wednesday with CNN President Jeff Zucker.

Inexplicably, this interview about a very important subject -- the possibility of journalists armed with little more than a microphone getting assaulted -- was written like a puff-piece feature story.

But if you had the patience to wade through the fluff such as the lede paragraph about how poor Jeff Zucker doesn't get enough sleep, you could actually find some quotes and other material that would have been much more accessible if they had only been played higher in the story.

For such a long story, quotes from the interview subject were pretty paltry. Here are the best ones, out of the few that there were:“My job is to remind everyone that they need to stay focused doing their job. [Trump is] trying to bully us, and we're not going to let him intimidate us. You can't lose your confidence and let that change the way you conduct yourselves,” Zucker said.

“[Trump] has caused us to have to take steps that you wouldn't think would be necessary because of the actions of the president of the United States,” Zucker said of CNN's stepped-up security measures, which he apparently didn't share with the Times reporter.

Zucker makes a good point here. No matter how contentious the relations between presidents and news media have been in modern history, a president setting an example of literally tackling the news media is unprecedented.

On the other hand, whether this video -- which in many ways was just silly -- will actually result in attacks on TV journalists remains an open question.

The more important question or questions raised by this video would be how it fits into the mindset of Donald Trump, and perhaps more crucially: What does it say about his mindset?

As Zucker points out in the Times interview, Trump is obsessed with television. How many times he has been on television is something of a scorecard by which Trump measures success. How he is portrayed on TV seems to be just about the most important thing in his life.

The problem for Trump seems to be that the job of president sucks up a lot of time he would rather be spending appearing on TV shows and then watching himself later.

And it apparently doesn't matter what the show is, either. If Trump's excitement over this Wrestlemania video is any indication, he was evidently pleased with the way he looked tackling a man to the ground and pretending to pummel him.