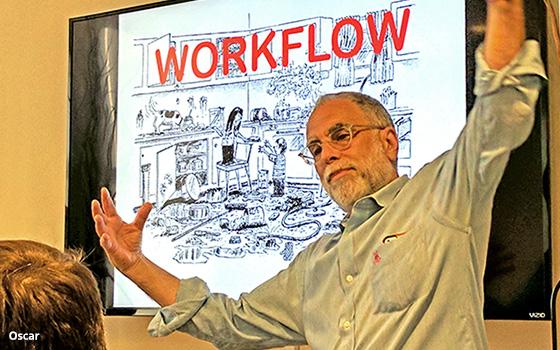 At a time when the TV industry is focused on pushing the sizzle of new shows and upfront ad sales, a group of top television data and technology executives met quasi-secretly to tackle a burgeoning problem more akin to watching paint dry: workflow management.

The TV industry was the earliest innovator of electronically managing the workflow of advertising deals — especially the exchange of data verifying, posting and measuring its ROI and yield.

But the digital ad business has overshadowed it in recent years with major investments in so-called “ad ops” to reduce the amount of friction advertisers and agencies have managing their digital media buys.

That’s a real turnabout from 2006, when the American Association of Advertising Agencies released a so-called “eBiz” report showing that conventional TV advertising had the most state-of-the-art electronic workflow, while online media actually had the worst.

Eleven years later, the marketplace has grown incredibly more complex, thanks to the proliferation of new media options, sources of data, and importantly, systems for managing and processing advertising buys. They include programmatic, addressable TV, attribution and modeling.

Estimating there currently are “31 different products from six companies” that advanced TV advertising buyers must vet and choose from, Oscar kicked the meeting off by suggesting it is time to devise standards and common language for defining the data and processes used to manage such buys.

The meeting, which was held in USIM’s New York City offices, was attended mainly by suppliers of data, workflow management and TV advertising inventory representatives of Comcast, AT&T, Cablevision, DISH, Freewheel, Google, TiVo, ESPN, Fox, Turner and others. It focused primarily on the current state of complexity and what the TV industry needs to do to reduce it in order to remain competitive.

One key development contributing to the complexity: Many of the biggest TV players have recently created their own data management platforms. The goal is to help advertisers and agencies target their audiences with the same precision they use in digital media buys, utilizing actual consumer segments instead of Nielsen’s flatter demographic audience breaks.

In many cases, the data is very rich, granular and tied to valuable first-party data, albeit on privacy compliant bases. The problem is there is no unified way to compare the segments, much less the overlap in reach and frequency that might occur from trying to build TV advertising schedules across them.

In April, three of TV’s biggest purveyors -- Fox, Turner and Viacom -- joined together to form OpenAP, a platform that seeks to unified the language used by their audience-targeting systems, which is a good step in that direction.

But some of the attendees at Oscar’s meeting indicated it doesn’t go far enough.

“We have to find a lingua franca that we can all use,” Oscar said. He noted the problem is bigger than simply unifying a common definition of audience segments. It also relates to the growing complexity of measuring ROI for the buy-side and yield for the sell-side of advanced TV advertising deals, which may also include some digital and OTT inventory, too.

“There’s a lot of black box in terms of the attribution model,” noted Walt Horstman, who recently joined TiVo as senior vice president-general manager of analytics and advertising from Comcast’s AudiencExpress, which pioneered programmatic sales and yield management for local cable TV advertising.

One of the problems with so-called black boxes that process outputs, but don’t necessarily disclose how the data was processed, he implied, is that they can be used to optimize any outcome the user wants to see.

“It was clear that whoever was paying for the study was going to get the results they wanted,” he said, referring to some of the attribution analyses he witnessed while working at AudiencExpress.

As complex as advanced TV’s new workflow ecosystem is getting, some data management processors are taking steps to make it easier to use. The first step, said Lorne Brown, president of SintecMedia, is simply figuring out how to categorize how the data needs to be organized.

Brown began outlining a working model for that on a post-it board (photo below).

Brown said the initial goal is to conceive a method of “product unity” the entire TV industry can accommodate. He added the industry is moving toward a “fluidity model” built around commonly defined parameters that individual companies can use to make their own cases.

“This is an incredibly complex problem we’re trying to solve,” he said. “How do we connect linear systems to nonlinear systems and let the work flow?” 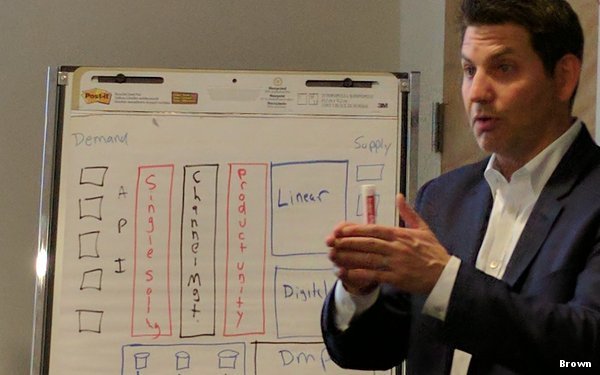 advertising, big data, tv
6 comments about "TV's Next Big Show Is Shaping Up To Be Media-Buying Workflow".
Check to receive email when comments are posted.
Read more comments >
Next story loading