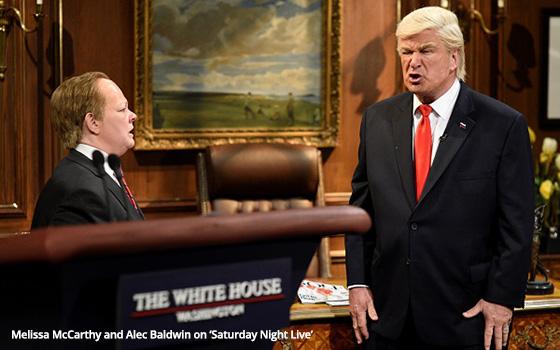 The Emmys are beginning to seem like a kids’ sports event where trophies are given out just for participating.

Not to denigrate the great work being done all over the place these days in the arena of small-screen content, but some of the sheer numbers of nominations announced last week for individual shows and networks are staggering.

Twenty-two each for “Saturday Night Live” and “Westworld”? Eighteen for “FEUD: Bette and Joan”? Seven each for “Dancing With the Stars,” “Hairspray Live!,” “RuPaul’s Drag Race” and “Transparent”? My goodness.

With this year’s nominations, the TV industry surpasses the movie business in expressing its community-wide egotism.

Twenty-two Emmy nominations for “SNL” in a single season? Compare that number to the most Oscar nominations ever given to a single movie: 14 for “La La Land” just this year, tying “Titanic” (1997) and “All About Eve” (1951).

In addition to providing the complete list of Emmy nominations as it always does, the Television Academy last week also provided interested parties such as journalists with various ancillary documents discussing some of the numbers.

One of the documents gave the number of nominations by show. When you got below the double-digit amounts (such as the ones cited above), you learned that 11 shows received four nominations each, 16 shows received three nominations, 37 garnered two nominations apiece, and -- wait for it -- 130 shows had at least one Emmy nomination each.

This list of single-Emmy nominees (which I am reasonably certain I counted correctly), includes everything from “Diners, Drive-Ins & Dives” and “Jay Leno’s Garage” to “The Mr. Robot Virtual Reality Experience” and “Saturday Night Live Multiplatform Experience” (something separate from the aforementioned regular “SNL” mentioned above).

The inclusion of so many obscure titles and projects within the long list of Emmy nominees was the trigger for my analogy between the Emmy nominations and some kids’ sports competitions in which every child gets a trophy regardless of whether or not they distinguished themselves on the playing field.

A couple of caveats here: I’m well aware that the numbers of trophy winners in September will be far below the numbers that were nominated.

I also know the production of TV shows is a complicated business requiring many moving parts, reflected in the many Emmy categories meant to recognize excellence in a wide range of technical areas.

Most of these won’t be included in the prime-time Emmy show, scheduled for Sept. 17 on CBS.

It’s also true that without the incredible advancements in portable digital film-making technology that have taken place in the last 10 to 15 years or so, much of the TV content so highly praised today would not have been possible.

Nor would any of it look as good as it does if it weren’t for the high-definition technology used for presenting it in homes and on portable devices.

At the same time, however, when the TV Academy produces a list of Emmy nominees that seems to include almost every show there is, the Emmys are in danger of diluting the pool of what most people might consider to be “excellent.”

No network or streaming service seems to have been left out, either. At the top of the list was HBO, with 110 nominations, according to the Academy. Oops! Make that 111. HBO made sure to correct the number in a press release emailed to journalists last Thursday.

Also on the list were a number of networks and content services that each received one nomination, including arts.gov, Facebook Live, Open TV, Play.Google.com and many others.

It's almost as if there are no set criteria anymore that must be met before an entity can earn classification as “TV.” These smaller services and websites are not “TV,” are they? They’re just websites that happen to have video content. That doesn’t sound like “TV” to me.

This year’s Emmys will be held at the Microsoft Theater in Los Angeles, which can accommodate 7,100 attendees.

Well, good luck with the seating arrangements, TV Academy. There just may not be enough seats in this theater for all of the nominees you have created this year.