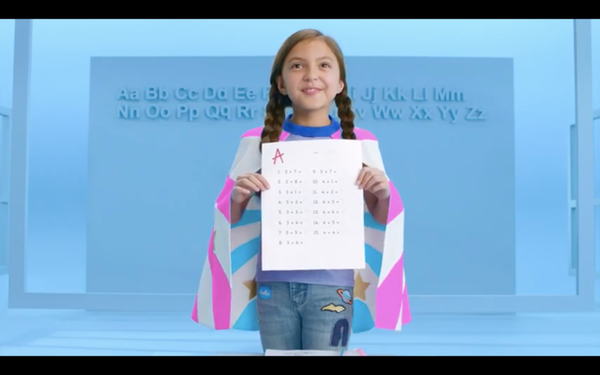 Target, looking to be aggressive with new private-label brands, is cheering parents on with its new back-to-school campaign.

The new effort, “Ready.Set.Prep,” is from Deutsch L.A., with tracks by singer-songwriter Betty Who. Ads feature megaphone-wielding moms and happy offspring marching through the aisles, with spots like Study Hauls, Go Team, Prep Squads, Be Impressive and Catpacks showcasing cute clothes, fun accessories and all the back-to-school basics, tossed in the cart for one easy trip. And like Walmart, Target is also looking to make it quicker to buy entire classroom lists at once, with a School List Assist service.

The kids are decked out in Cat & Jack, the Minneapolis-based retailer’s private label line launched last fall. With apparel, backpacks and lunch kits in plenty of metallic prints and iridescent styles, it’s got schoolyard swagger, and since bowing a year ago, Target has said Cat & Jack boosted spending on kids’ clothing by 50%. Observers are watching it—and all Target’s private-label initiatives—closely.

Besides Pillowfort, a line of kids’ décor, the company says that new Cloud Island baby brand is doing well. And earlier this month, it announced four new private-label lines: A New Day, a women’s clothing and accessories; Goodfellow & Co., a menswear collection it describes as “modern meets classic;” JoyLab, activewear with an “edgier, street fashion vibe,” and Project 62, a home brand.

The new BTS campaign comes a week after Target surprised the investment community with good news, saying that it expected its second quarter sales to march back into positive territory and that earnings would go up as a result.