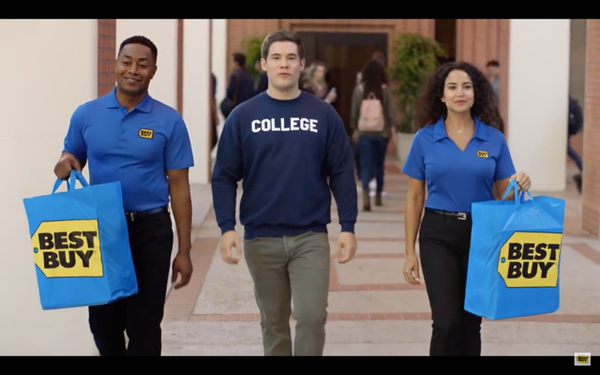 When it comes to electronics, no one spends bigger than incoming freshmen, so Best Buy is looking to win them over with funny spots welcoming them to Almost College University.

Like last year’s campaign, it stars comedian Adam (“Modern Family”) Devine, who walks newbies through college realities, like the best way to ask your parents for more money, how to ditch the old-school backpack and surviving the hangries.

There’s big money at stake: While “back to school” shopping may conjure up images of adorable munchkins with new lunch boxes, back-to-college shoppers account for roughly two-thirds of all back-to-school spending, with Deloitte predicting that America’s 19 million college students will spend $46 billion this year, flat with last year. That amounts to roughly $1,347 per child, parents say. (When students are asked, they estimate they’ll spend $1,051.) Tech takes the biggest bite, with 41% of parents who plan to buy a computer saying they’ll spend an average of $648, and 34% planning to buy electronic gadgets, such as phones, e-readers or subscriptions, spending $314.

Deloitte’s survey bodes better for Best Buy, indicating a 10% jump in the number of parents who say they plan to make purchases at a consumer-electronics store, to 33%. (About 29% of students say they plan to do so.)

The National Retail Federation recently released a different picture of back-to-college shopping, predicting it will rise 10% to a record $54.1 billion, up from the $48.5 billion it forecast last year, and beating the 2012 record of $53.5 billion. (Its numbers are based on a college population of 21 million, compared with Deloitte.) And it predicts $12.8 billion of that total will be spent on electronics, the largest spending category, followed by clothing, at $8 billion, $7.5 billion on snacks and food, and $5.9 billion.

With still a month to go before most colleges resume, there are signs that stores are already pushing the promotional panic button: JC Penney, for example, is hawking a 65% discount on dorm gear on its home page, while Macy’s is promising reductions of 30 to 50%.