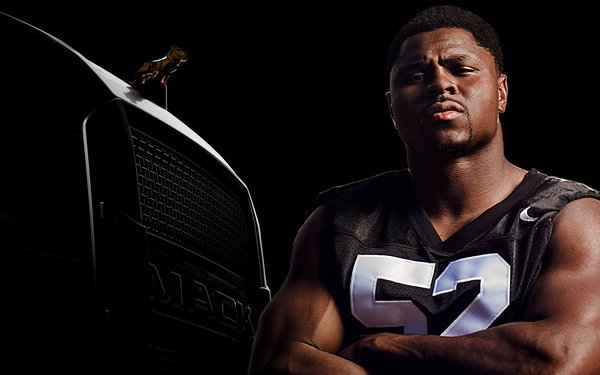 Mack, the 2016 NFL Defensive Player of the Year, will support the Brooklyn truck maker in promoting news to be announced Sept. 13. A teaser web site hints that the announcement has to do with the company’s next-generation highway truck.

The partnership makes sense on a number of levels, said John Walsh, vice president of global marketing and brand management for Mack Trucks, which is part of the Volvo Group.

“Our efforts with Khalil are focused on reaching our primary audience, heavy-duty truck buyers, in an engaging, non-traditional way,” Walsh tells Marketing Daily. “Khalil Mack is a recognizable name, and so is Mack Trucks. We think that by working together, Mack with Mack, we can build brand awareness for both of us, in line with our shared values. But obviously, a lot of what we’ll do together will reach the general public as well, including the young people that Mack and the trucking industry as a whole need to attract to continue to be successful moving forward.”

Mack, originally from Fort Pierce, Fla., attended the University at Buffalo. The fact that he was lightly recruited out of high school and a low ranking by a well-known video game maker going into his sophomore year of college served as motivators for him to work even harder. He was selected by the Oakland Raiders with the fifth overall pick in the NFL draft in 2014.

The football player is featured in an online video introducing the partnership. The video was created internally by the Mack marketing team with support from Mack and his team at Lagardère Sports.