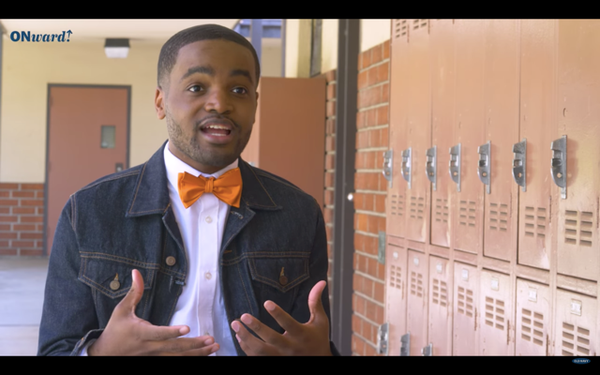 Old Navy, which has backed away from its funny-girl advertising, is bursting into inspirational song for back-to-school, with a series of music videos starring some of America’s most-talented teachers.

Working with music star Pharrell Williams' creative collective, “i am OTHER,” the retailer created a series of eight videos that all support ONward!, the retailer’s new cause-marketing platform. All eight teachers use original music to inspire students, and the creative helped them make dance videos that highlight both the teacher’s particular passions (being true to yourself, for example, or the computational challenges of getting dressed for school) and kids showing off Old Navy’s back-to-school looks.

Among them is a new song from Dwayne Reed, a fifth-grade teacher from Chicago who had something of a viral hit last year with "Welcome to the 4th Grade."

Real-life students get into the act on several of the videos as well. The title track of the ONward! effort is from Cedric Gardner, a professional dancer and youth specialist from Milwaukee, with Boys & Girls Clubs kids as back-up dancers. And Beth Fortune, an orchestra teacher from Seattle, rocks a folkie tune called Be Myself, backed up by her middle-school students on fiddle, cello and guitar.

The teachers’ videos are exclusively digital and running on Old Navy’s YouTube page, within its social channels and on music platforms like Vevo, says an Old Navy spokesperson. A separate broadcast back-to-school spot is scheduled to premiere in early August and run through Labor Day. “The creative direction of that spot reflects our new 'Hi, fashion’ platform that was launched in March, and focuses on kids rather than celebrity talent,” she tells Marketing Daily. Until then, Old Navy’s campaigns had starred the likes of comedians Amy Schumer, Julia Louis-Dreyfus and Amy Poehler.