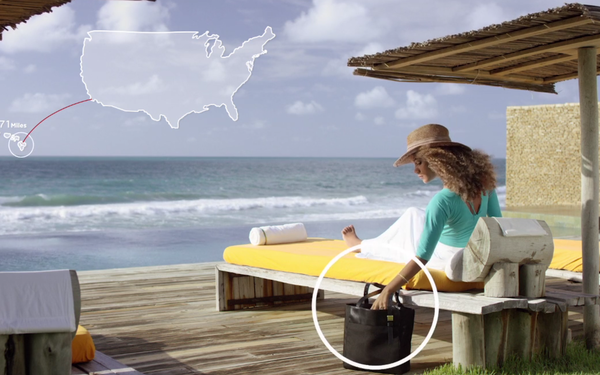 Bid goodbye to lost luggage. Even that most pedestrian of travel accessories, the suitcase, is getting a technological upgrade, thanks to Tumi and AT&T.

The two companies have come together to create the “Global Locator” a wireless tracking device designed to provide travelers with information about the whereabouts of their luggage and travel bags, using GPS, wireless and Bluetooth technology. To promote the launch, Tumi teamed with content studio The Collective@Lair to create a digital campaign that’s as much about fashion as it is technology.

“Tumi is a brand that kind of does fashion advertising for luggage,” Thor Raxlen, creative director at Lair, tells Marketing Daily.

The digital spot tells the stories of three travelers using the locator. One is a man leaving on a trip who forgets his bag at home and is alerted to it by a proximity locator. The second is a woman waiting for her misplaced luggage while on a tropical beach, and the third depicts a man and a woman accidentally exchanging suitcases in a crowded airport.

Beyond promoting the Global Locator, the spot also works to build the entire Tumi brand, says Steven Weinzierl, designer and director at Lair. Several other Tumi products, from jackets to wallets, have been snuck into the spot as well, he says. “It’s more like selling the technology of Tumi [overall] than just the product.”

The spot is currently appearing on Tumi’s website, on its social feeds and in-store, though it’s possible it will roll out to other media “as necessary,” Weinzierl says.