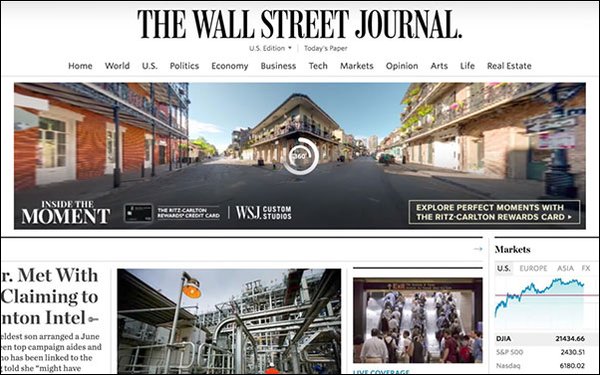 The virtual-reality campaign, called “Inside The Moment,” lived in an interactive 360-degree display banner just above the homepage’s content. The video swung around a spot in an attractive neighborhood. (The campaign is now running elsewhere on the WSJ site.)

Once readers click on the ad, it takes them to a page dedicated to the campaign, where they can explore nine different neighborhoods in San Francisco, Miami and New Orleans.

For example, if you click on San Francisco, you can whizz around Russian Hill at sunset. You can also click on “hotspots,” which zoom in on specific retail locations, like a wine shop and a grocery store, with suggestions on how to use the Ritz-Carlton Rewards Credit Card.

The description of the Biondivino Wine Shop in Russian Hill reads, in part: “Ritz-Carlton Rewards Credit Card members may want to use their $300 travel credit towards extra baggage fees so they can take a few of their favorites home.”

The 360-degree videos are also optimized for mobile.

A recent study conducted by Vibrant Media found 73% of more than 3,000 consumers surveyed from the U.S., U.K. and Germany said they were attracted to VR and AR ads related to travel and holiday destinations.