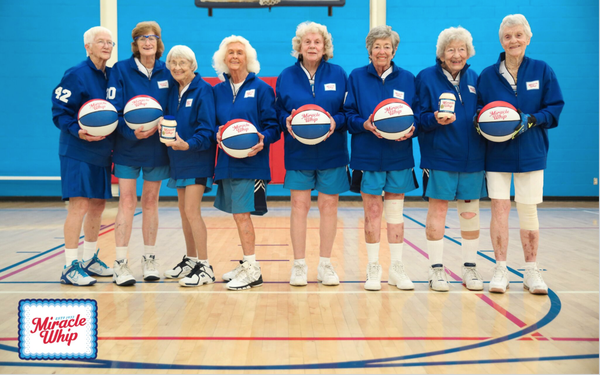 Miracle Whip is throwing its support behind the feisty senior women of the San Diego Splash.

The women’s basketball team features women who are each 80 years old or older, with the oldest player coming in at 92. The team is the oldest in the San Diego Women’s Basketball Association and winner of multiple gold medals at National Senior Games.

When Miracle Whip saw a recent sports segment about the Splash, they knew that these were the athletes to be celebrating, said Matt Carpenter, director of marketing for Miracle Whip.

“This spring, we brought back our original gold standard recipe," Carpenter notes in a  release. “Then, when we learned about the Splash, we knew that this was our opportunity to celebrate a group of women who are challenging the expectations of just how good 80 years can look. This is a team filled with spirit, originality, and of course, excellent hook shots.”

The team and Miracle Whip announced the sponsorship in a video on their respective Facebook pages. The endorsement deal will span the 2017-18 season.

The San Diego Splash rose to fame in late June 2017 when they were featured in their first national sports segment and garnered more than 12 million views of the initial video.

As part of the initial partnership, the San Diego Splash will receive support for their annual girls basketball camp scholarship program, league fees, official brand gear for warmups and an ample supply of Miracle Whip.

The longstanding history of Miracle Whip is not lost on the Splash either.

“I couldn’t be happier because I’ve been a Miracle Whip fan since I was 3 years old,” said player Jean Field, now 86.  “My grandparents had it in their icebox. My mother had it in her refrigerator. And it’s been in my refrigerator and my kids’ refrigerators for years.”