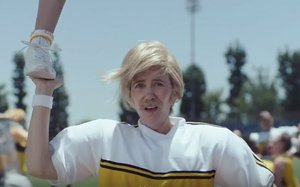 Kristen Wiig’s genius for transforming into divergent characters, showcased for years on “Saturday Night Live,” has now been harnessed for a new Pizza Hut campaign created with Droga5.

In two TV spots for “The Everyman” campaign launching today, Wiig dons disguises for a rapid series of portrayals ranging from a DIY car mechanic to a peppy female teen to an elderly male farmer.

The concept: She’s speaking for every man, woman and child in America, who supposedly share a desire for “fast, oven-hot” Pizza Hut pizza.

The 60-second version (below) stresses the fast delivery promise, noting the chain’s hiring of more drivers and enhanced delivery tracking app for customers.

A 30-second version mentions both pick-up and delivery options, as well as call-in and online ordering options, and promotes a special $7.99 deal.

While this is Wiig’s first national advertising campaign, it’s not her first association with pizza.

In an SNL sketch originally aired in 2012 that spoofs frozen pizza in general and DiGiorno in particular (“It’s not delivery, it’s DiGiorno”), she tries to convince her family to eat an oddly behaving “Almost Pizza,” from Pfizer.