'Vice' Lays Off 2% Of Staff To Focus On Video 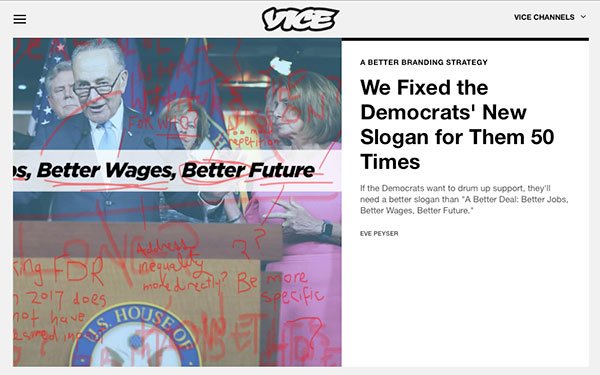 Vice Media let go 2% of its staff Friday, as it reorganizes and focuses on international expansion and a greater push into video.

Vice’s decision impacted around 60 employees of its 3,000-person staff in North America and Europe, according to Variety, which first reported the news. There were cuts in sales, branded content, editorial and corporate departments.

This year, Vice plans to open in India and the Middle East and staff up new markets in Brazil and Indonesia.

Vice will focus less on sports and online editorial and more on both nonscripted content and its new Vice Studios, which produces scripted entertainment for TV, film, mobile and digital platforms. It will hire staff for both.

The efforts are supported by $450 million in funding from private-equity firm TPG, which valued Vice at an estimated $5.7 billion last month.

“This [investment] will allow us to build up the largest millennial video library in the world, enabling Vice to widen our offerings to include news, food, music, fashion, art, travel, gaming, lifestyle, scripted and feature films,” Shane Smith, Vice’s founder and CEO, stated at the time of the investment.

Variety reports Vice’s online arts, culture and nightlife coverage on its Thump and Creators verticals will fold into the main Vice.com site.

Vice Sports will focus on producing video. Editor-in-chief of Vice Sports, Jorge Arangure, was among those let go.

Publishers pivoting to video is a growing trend. In June, media and tech news site Vocativ let go of its entire editorial staff to focus exclusively on video content.

Though Vice has steadily made video an important part of its brand for years — with its documentaries, launch of cable channel Viceland and a daily news show for HBO — this round of layoffs represents a reallocation of resources to further this goal.