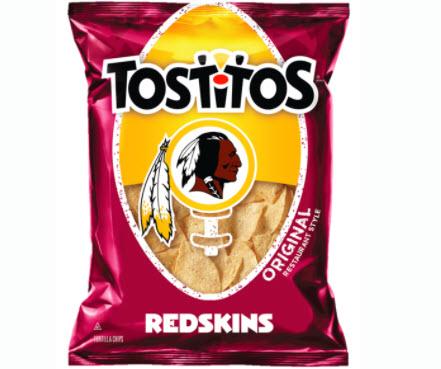 PepsiCo has prevailed in the latest sports sponsorship face-off with archrival Coca-Cola.

PepsiCo signed a long-term deal with The Washington Redskins that ends the Redskins’ decades-long beverage sponsorship with Coca-Cola — at least until the contract comes up again.

PepsiCo’s Frito-Lay snack brands and Gatorade already had sponsorship deals with the Redskins; now, PepsiCo will become both the non-alcoholic beverages and snacks sponsor for the team and FedExField, starting in August.

PepsiCo also will be the presenting partner for the Redskins’ 2017 season.

As part of the agreement, this fall, in the Baltimore/Washington, D.C. area, Tostitos and Pepsi will offer limited-edition packaging bearing the Redskins logo.

Tostitos also saluted the Redskins’ marching band and “infused the chips with Redskins luck” with a video showing a one-man band play marching songs as the chips came off the production line. (The Washington Post’s Dan Steinberg noted that given the Redskins’ record in the past two decades, he “might prefer chips infused with Patriots’ luck.”)

The Redskins Tostitos bag is one of 19 “Lucky Bags” being produced for the upcoming season, to pay tribute to the traditions of various NFL teams.

PepsiCo also will sponsor an event at the Redskins’ first game on September 10.

This is the second turnabout this year between the two sports sponsorship rivals. In April, Coca-Cola replaced PepsiCo as the official nonalcoholic beverages sponsor of Major League Baseball — although Pepsi is still being sold in 11 stadiums where PepsiCo had existing team partnerships.

Back in 2015, Pepsi inked a contract with the NBA, ending Coca-Cola’s 28-year sponsorship partnership with the organization.