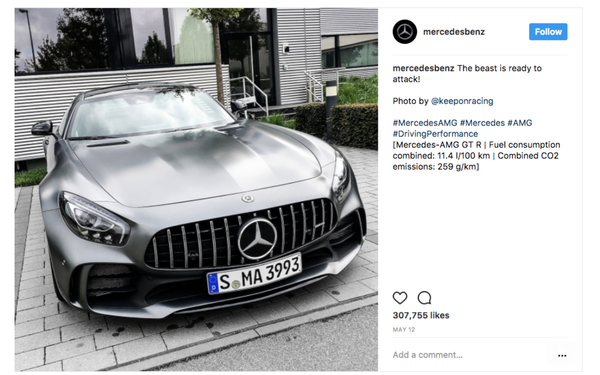 Mercedes-Benz takes the top spot, and automotive and luxury brands dominate the top 25, in an analysis of social activity by leading brands.

High-end, photogenic brands -- perfect for Instagram -- were well-represented in the Top 25, as automotive brands took nine out of the top 25 slots and luxury brands took eight in the analysis by Origami Logic.

Thanks to a prolific Instagram account featuring beautiful pictures of their automobiles, Mercedes-Benz clearly took the top spot with a total engagement score of 153,705,401.

A big surprise is the difference in engagement levels among brands in the same industry, says Steven Wastie, Origami Logic chief marketing officer. One example is luxury automotive brands.

While Mercedes-Benz earned the most total engagement on Instagram, Nike (316,608 engagement per post), GoPro (211,793) and BMW (192,728) got the most bang for their efforts with higher average engagement scores per post.

Wendy’s dominated the engagement game on Twitter, thanks to a personal campaign launched by Carter Wilkerson that went viral. Wendy’s had a total engagement score on Twitter of 47,484,591 (the next highest score was Walmart with a score of 10,499,450). Wilkerson’s plea for people to retweet his tweet so he can get a year’s worth of chicken nuggets resulted in an avalanche of retweeting. Over 77% of the engagement received by Wendy’s were retweets.

Activity, by itself, doesn't result in engagement, Wastie says. The brand with the most activity out of the 305 brands tracked, B&H Photo Video, only ranked 137th in total engagement. It pushed out 4,753 tweets in the first half of 2017, and 5,252 messages overall, but the tweets didn't get much engagement.

“Ultimately, brand marketers need to publish content that resonates with their audience,” Wastie says. “Luxury brands, in general, are good at this. They publish beautiful, aspirational photos of items that their followers would love to own. This is why luxury brands held 15 out of the top 25 spots in terms of total engagement.”