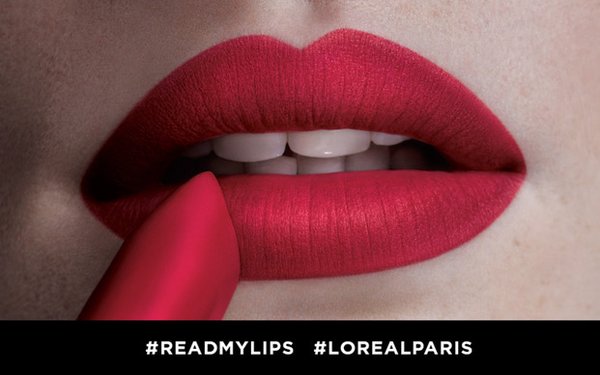 L’Oreal Paris is asking fans to do more than pucker up for National Lipstick Day—it’s asking them to mouth off in a #ReadMyLips social-media campaign.

L’Oreal’s effort, which also marks the launch of its Colour Riche Matte Lipstick, invites consumers to post pictures of themselves “showing off a bold hue and sharing bold words.”

The company says the idea for this year’s campaign came about because it wanted to get away from the lipstick facts (the average American woman spends $1,780 on lipstick over the course of a lifetime, for instance) and “elevate the conversation by celebrating …people's powerful words.”

With luck, it will elevate sales, too. L’Oreal just released its first-half results, and while the Paris-based company is reporting 4.3% sales growth overall, business in the U.S. has “slowed very substantially,” it says in its announcement.

Other brands are also lining up for the big day, with MAC Cosmetics promising a free lipstick — in any color, no less — at its counters. Avon, which sells a lipstick every 15 seconds and says its best-seller is Cherry Jubilee, is running a sweepstakes to let people win all 40 colors in its True Color Collection. Revlon, which says the average American woman buys five new lip products a year, that 80 percent of women wear it regularly and that it sold more than 170,000 Cherries in the Snow (its classic red) in 2016, is sponsoring a Snapchat Lens for the big day.

YouCam Makeup, meanwhile, which catches something like 24 million augmented-reality lipstick try-ons each day, says the biggest trend isn't red, but Millennial pink. It says more than 20% of lipstick try-ons in the U.S. the U.K. are Millennial pink shades, and 50% are in the pink family. And while 15% of lip experiments in China are also Millennial pink, China shows the most diverse color trials, including purples, oranges and sheer shades taking the top spots.

Two-toned lips, with different colors on top and bottom, are the hottest trend.