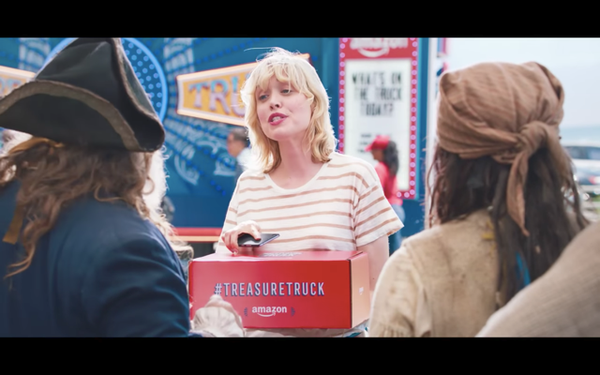 Anyone wondering where all the retail sales are has the answer now: Amazon says its sales shot up 25% in the second quarter to $38 billion — better than expected. And Prime Day -- its third -- set new records, not just for the biggest single day of sales, but also for signing up the most new Prime members. Yet net income fell to $197 million from $857 million, well below analysts’ predictions, proving that world domination doesn’t come cheap. And while it’s forecasting a sales gain of more than 20% for the third quarter, it says it may post a loss of up to $400 million.

“As good as Amazon is at generating sales, it is far less successful in turning those sales into profits,” writes Neil Saunders, managing director of GlobalData Retail, in his comment on the results. “To be fair, much of this is deliberate: Amazon chooses to reinvest in its business and to sacrifice profits to boost its market share and dominance. However, such a strategy shows up in a weak set of bottom-line numbers. Indeed, in its latest quarter, Walmart made more net profit in a week than Amazon did during the entire three-month period.”

As is true with most of its earnings releases, Jeff Bezos, CEO (who had a brief turn earlier as the richest man in the world) used the occasion to make a laundry list of Amazon's many accomplishments in the quarter. Those include device successes, with the Echo Dot emerging as the best-selling Amazon device this Prime Day, as well as the bestselling product from any manufacturer in any category, and the launch of the Echo Show, which has a video screen, new Fire tablets, expansion of channels and services in new markets, its 25th airplane with Prime Air, and new Alexa home capabilities.

Among its programming achievements, Amazon called out the release of its latest movie, The Big Sick, with its 98% rating on Rotten Tomatoes, and 16 Emmy nominations.

It opened three new Amazon Books stores, and will soon have a total of 13 -- its brick-and-mortar attempt to meld the benefits of offline and online shopping for both books and devices. “Worryingly for other retailers, Amazon shows no signs of slowing down,” he writes. “And all of this comes before the sales benefits of Whole Foods, which will boost future growth rates by around 12 percentage points. All in all, it is clear that Amazon is not only increasing its dominance but is doing so at an ever-faster pace.”

Whole Foods Market, meanwhile, also just released its results, and they too exceeded expectations. Total sales improved 0.6% to $3.7 billion -- a record -- while comparable-store sales decreased 1.9%. Observers had expected them to fall 2.5%, so these results mark its first improvement in comparable-store sales since 2015.

Net income was $106 million, and while that marks a significant decline from $120 million last year, it still came in above forecast.