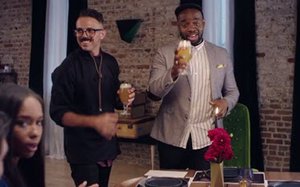 Stella Artois’ series — part of its “Host One to Remember” campaign — offers inspirational advice from contributors on the art of elevating hosting occasions to “something extraordinary.”

The first (below), featuring Chicago-based photographer Paul Octavious, went live on July 28 on the brand’s campaign area within the studio’s sponsored content on NYTimes.com.

The video contributors will also be featured at live events showcasing their individual approaches to hosting.

In addition to an ad in the food section of the Times’ print edition on Aug. 2, the brand is supporting the series with digital ad content and social media outreach.

The Times studio collaboration reflects Stella Artois’ general approach to choosing partners that “inspire us, share our vision and are authentic in their craftsmanship, to help establish the brand’s unique point of view on how to host, in a way that will resonate with our consumers,” the brand’s VP, Harry Lewis, tells Marketing Daily.

The summer leg of the campaign also includes videos made specifically for Facebook and Instagram offering hosting tips from other contributors.

Chef-driven events around the country include appearances by the brand’s Airstream trailer at food and wine festivals.

The brand also is running new “Host One to Remember” TV creative, from the Mother agency, in which a summer party host wows his guests with party tricks and ample Stella Artois.

Hennessy Paradis Imperial launched its first global campaign this summer, with a “Made of Precision” theme spotlighting the “extreme” levels of precision that go into making the Cognac. (For example, on average, just 10 out of 10,000 eaux-de-vie, or colorless fruit brandies, are ultimately deemed to have the quality for use in the Paradis Imperial blend, according to Hennessy.)

The campaign — which spans digital, out-of-home, print and events — is timed to mark Paradis Imperial’s creator and seventh-generation master blender of 50 years, Yann Fillioux, turning over his role to his nephew, Renaud Fillioux de Gironde.

The campaign’s creative components all incorporate a trio of images, made using photography and data, that imply the blending process and showcase the blend’s unusual golden hue.

Print ads are on view in airports in Shanghai and France, as well as JFK, LAX and Miami in the U.S.

In September, Hennessy will unveil an art installation dubbed “The Masterpiece” in Cognac, France, designed to serve as a “360-degree immersion” in the creation, selection and blending process of Paradis Imperial.

Also in the months ahead, Paradis Impérial will co-host “Made of Precision” experiences as part of partnerships with Sotheby’s, Galerie, Yachting  Magazine, Cruising World, Robb Report, Forbes, and Bloomberg.