Violence Debate Is Thing Of The Past As TV's Bloodlust Grows 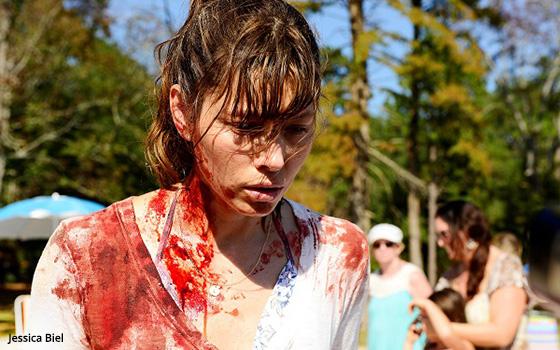 How inured are we now to depictions of bloodletting in our TV shows and movies?

We are so used to seeing depictions of violent acts and their bloody aftermath that a bloody photo like the one above was actually made available by the USA Network p.r. department to publicize this new show.

The bloody figure in the picture is Jessica Biel, who stars as a woman who suddenly and inexplicably stabs someone to death, leaving her covered in this person’s blood. The mystery then becomes not who did it, but why she did it.

The show is called “The Sinner,” and it is a new “edgy” drama premiering Wednesday night on USA Network.

The word “edgy” is in quotation marks here because it is not an adjective I like to use. However, the TV industry uses it with abandon to describe shows such as this one. Its use usually means a show will be violent, sexual, and in many cases, intends to explore the dark side of the human psyche.

To the makers of these shows and their networks, “edginess” is seen as a trait well worth pursuing and promoting. To me, “edginess” signals a TV viewing experience that figures to be, in many cases, dreary, uncomfortable, unsettling and, basically, very low on my list of things I like to do.

The older I get the more I keep thinking that this is where I part company with so many other people who seem to revel in TV shows that come along regularly these days on basic cable, pay-cable and SVOD that all exhibit a high-octane mix of blood and sex.

Along with these graphic elements, they often have pretensions of delving deeply into the abyss of human emotions. “The Sinner” is one of these.

USA Network provided three episodes for preview, but the pilot was enough for me. I thought the show was horrible, but as with many other shows that make me wish I had never watched them, this one might appeal to the same people referenced above for whom no amount of bloodletting or anti-social behavior is enough.

The above photo notwithstanding, the entire premiere episode of “The Sinner” is not particularly bloody, although the murder scene more than makes up for that.

Along the way, you will also be introduced to a police detective played by Bill Pullman who has a secret, kinky, obsessive-compulsive sex life. Why is this important to the story? Well, maybe the answer becomes apparent in future episodes, which means it’s doubtful I will ever learn it.

The story in “The Sinner” takes place in smallish town where everybody seems to know each other. The time frame is summer, with some of the scenes taking place on a lakefront public beach that is evidently popular with families.

It’s the kind of summer fun many people here in the real world are having at this very moment, as a matter of fact.

I cannot speak for them, but if it was me enjoying some summer leisure activities on a beach somewhere, then the last thing I would want to do is spend part of a lovely summer evening in the first week of August plumbing the depths of this murderous woman’s depravity.

But hey, that’s just me -- a TV critic in his 50s who is old enough to remember when debates raged over the violence on television, and people actually cared.

tv
4 comments about "Violence Debate Is Thing Of The Past As TV's Bloodlust Grows".
Check to receive email when comments are posted.
Read more comments >
Next story loading