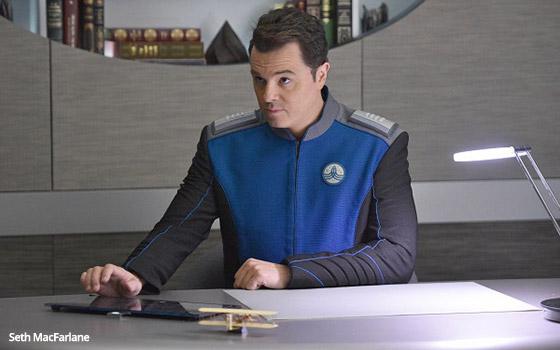 Producer and TV cult leader Seth MacFarlane blasts off into live-action space this fall in a one-hour series that is part comedy, part action-adventure, and part “Star Trek” spoof.

The question is: Do all the parts come together to make a cohesive whole? The answer is: Not always.

Let the record show that this is not technically a review of this new fall show called “The Orville,” which will premiere on Fox on September 10. Call it a preview, rather than a review.

The pilot I watched this week (plus most of a second episode) could conceivably undergo changes by the time the shows premiere (although this seems doubtful with this show).

“The Orville” is getting its own column now because of the mighty power of Seth MacFarlane, whose animated creations are among the most ubiquitous and profit-generating shows now on television.

“Family Guy,” “American Dad!” and “The Cleveland Show” are inescapable. The repeats seem to air everywhere and at all times, a phenomenon that has been going on for years.

MacFarlane is famous for creating the shows and also for supplying various voices for them. To many people, he is as close as we get to a television god.

Next month, he intends to apply those godlike powers to this new one-hour series which happens to be a live-action show -- which means it has real people, not cartoon ones.

One of the people is MacFarlane himself (pictured above). He stars in it as the captain of this futuristic starship called The Orville.

The show has a little bit of comedy in the form of wry remarks that are tossed around occasionally. And there are intermittent sight gags as well. But fans of, say, “Family Guy,” should not expect the kind of nonstop comedy that show is known for.

In “The Orville,” the lighthearted attitude frequently gives way to action scenes. Like the original Starship Enterprise in “Star Trek,” on which “The Orville” seems based on most, Capt. MacFarlane (actually his character is named “Ed Mercer”) and his crew often encounter hostile aliens. Battles then ensue that look no different than a thousand other ones you have seen before.

One of the subplots on “The Orville” involves Capt. Mercer’s former marriage to a fellow fleet officer who cheated on him. You will learn about this incident in the opening minutes of the first episode of “The Orville.”

His wife's infidelity, and their subsequent divorce, puts Capt. Mercer in a funk for a year, after which he obtains command of this starship.

There is one opening on his senior staff -- the position of First Officer. And wouldn’t you know it? His ex-wife gets the job, and the two are stuck traveling in space together! Oh my.

If that sounds like a funny situation, then that's not surprising. It probably sounded funny to MacFarlane and the rest of the writers on this show as well. Opinions on this may vary, however.

For example, while I was watching the show this week, the thought occurred to me that this estranged-couple plot line could be done away with and no harm would accrue to this show whatsoever. Translation: It's a storyline no one will care about.

I also had the feeling while watching the show that the one person enjoying it most is MacFarlane himself. He's like a kid in a candy store.

Evidently, he liked “Star Trek” a lot, and Fox has been generous enough to allow him to live out a “Star Trek” fantasy he apparently harbors.

That's not the worst idea I've ever heard of. But in its execution -- at least where the first episodes are concerned -- it's reasonable to wonder whether “The Orville” will ever take on the status and ubiquity of MacFarlane's other, animated creations.

Scheduling might help “The Orville.” It's getting introduced on two consecutive Sunday nights September 10 and 17 following NFL football on Fox.

Since Sunday nights are where MacFarlane has already reigned for many years, the hope is that his fans will be eager to sample his new show. Fox has already been promoting it very visibly this summer.

After its two airings on Sunday night, “The Orville” then moves to Thursday night at 9 Eastern on September 21, following the fourth-season premiere of “Gotham.” The two shows are not similar, but they seem to be compatible.

They will also be going up against NFL football, unfortunately, which won't do either of them any good, at least in their “live” airings. Perhaps “Gotham” and MacFarlane fans will just watch the episodes later.

This blog represents the second of these occasional “Fall Preview” columns this summer. The subject of this one has one notable similarity to the subject of the last one, which was the “Big Bang Theory” spinoff coming to CBS called “Young Sheldon.”

The pilot for that show and the pilot for “The Orville” were both directed by Jon Favreau. What's the significance of this? I have no idea.