Have An 'Ugly Fruit' Smoothie On Us 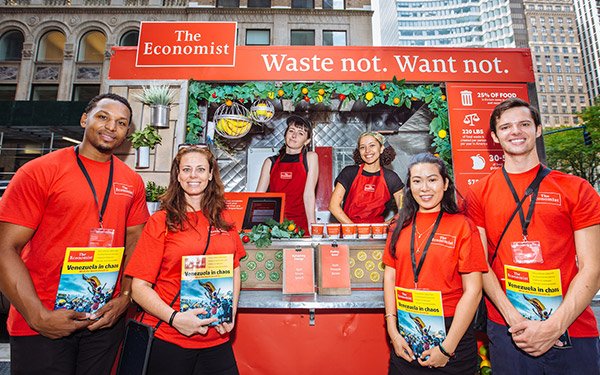 Now, The Economist is expanding the #feedingthefuture initiative by offering New Yorkers free smoothies made from produce that was destined for the trash.

Developed with experiential agency Sense, the "Waste Not. Want Not" activation concept promotes the publication's journalism through real world and somewhat gross and uncomfortable experiences.

As part of the third activation, an Economist-branded fruit and vegetable cart will take to the NYC streets in August and September to offer free smoothies to illustrate that ugly, wonky or bruised fruit and vegetables that are rejected by supermarkets can still be eaten and taste great.

Hungry Harvest, a startup that has claimed to have rescued over four million pounds of produce, partnered with "The Economist" and Sense New York to provide the ugly, past-prime produce.

All visitors to these experiences have the opportunity to subscribe to the publication at an introductory rate of 12 weeks for $12 and have the publication fund the planting a tree on their behalf.

To date The Economist’s experiential activities (which began in 2014) have generated more than 30,000 new subscriptions worldwide.