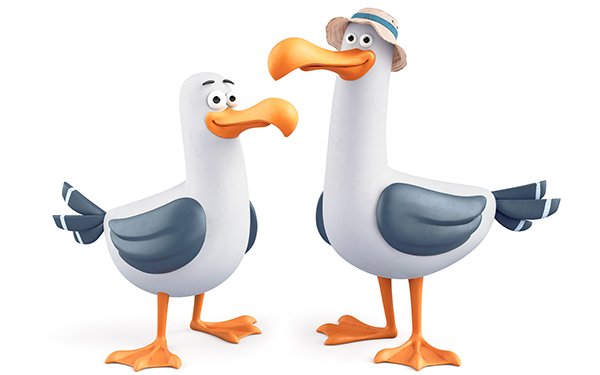 Captain D's and agency The&Partnership are launching "The Taste of the Coast" campaign to promote the fast casual seafood chain. This is the first fully integrated campaign delivered by WPP's The&Partnership since winning the account earlier this year.

The creative follows “The D-Gulls,” Dave and Desmond, as they embark on a "never-ending quest" to get their claws on Captain D’s seafood.

The first TV spot - directed by award-winning TV commercial guru Kevin Bean - provides an introduction to these characters as they are shown on the set filming their first TV commercial. An interview with the duo bird illustrates how obsessed they are with Captain D’s food. The spot ends by suggesting their love of Captain D’s is inspired by loyal guests who come to the restaurant to enjoy a “taste of the coast” with their friends and family.

These are Captain D's first "spokes-birds," says Bob Kraut, CMO, Captain D's. "We would like to create promotional equity with the D-Gulls and of course we would be delighted if they achieved iconic status for the brand."

The TV, print, and in-store campaign is designed to target specific audiences including a group that D Captain's Kraut calls "D’Votees”  that index higher in frequent visits, spend more per visit and are active in advocating for the brand in social media.

"We hope to engage and include a new digital savvy audience," says Kraut.

This campaign is the first time the 521-location restaurant is including mobile.

Kraut described mobile as “a  new territory for us which we look to build on."

Kantar Media reports the chain spent an estimated $2 million on advertising during the first six months of 2017.

"Our year-over-year media levels will be higher and the D-Gulls will play a prominent role in social media," says Kraut. Last year the seafood chain's ad expenditure budget was $10.5 million, up from $9.3 million in 2015, per Kantar.