The Fate Of Online Trust: Which POV Do You Trust?

A report that rounds up some of the internet’s most respected and pioneering experts suggests some mixed signals for its near and distant future. The report, released Thursday by the Pew Research Center and Elon University, shows a split between utopian scenarios in which online security and privacy will be enhanced via advances in AI, encryption, blockchain and other promising technologies and another suggesting an ongoing decay of trust, transparency and exploitation of people’s personal data and identities, as well as security breaches.

The findings come amid expectations of increasing consumer and business reliance on the internet as a backbone for exchanging information, data and commerce -- all premised on a single, dependent word: “trust.”

“Trust is a social, economic and political binding agent,” reads the report, which goes on to note: “Trust has not been having a good run in recent years, and there is considerable concern that people’s uses of the internet are a major contributor to the problem. For starters, the internet was not designed with security protections or trust problems in mind. As Vinton Cerf, one of the creators of internet protocols, put it: ‘We didn’t focus on how you could wreck this system intentionally.’”

In addition to rounding up opinions of leading authorities, the report offers some quants, including a non-scientific poll of 1,233 respondents, 48% of whom believe trust “will be strengthened,” 28% of whom said it will remain the same, and 24% of whom project it will “be diminished.”

The 88-page report draws no conclusions, but organizes the major issues surrounding the internet’s future role in society around six major themes outlined below. The full report can be accessed and downloaded here. 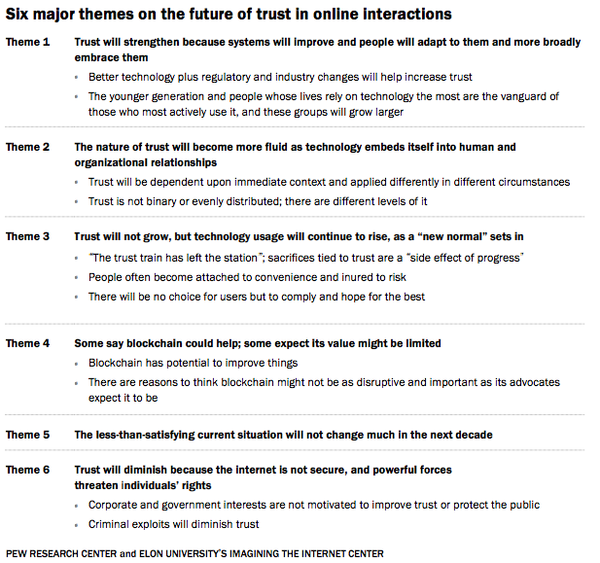