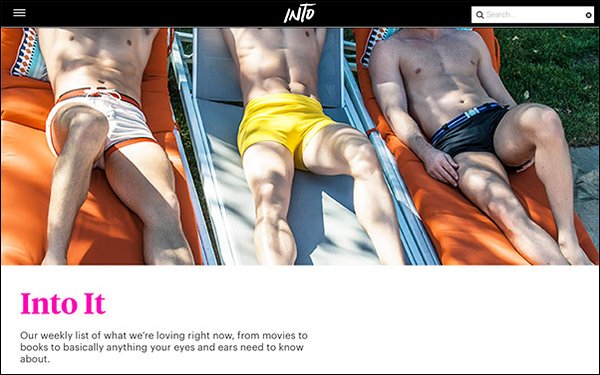 Gay hookup app Grindr is leaping into the Speedo-filled pool of gay lifestyle publishing with the official launch of Into, a new digital magazine targeting millennial LGBTQ audiences, the company announced this week.

Launched in beta in March, the pub attracted over 2 million unique readers with its first issue.

The magazine, available at intomore.com, will cover a range of lifestyle subjects from global LGBTQ perspectives, drawing on Grindr’s own editorial expertise regarding current trends in travel, entertainment, culture, politics, style, health and more.

Editor-in-chief Zach Stafford, who previously serves as editor-at-large for Out, said the magazine was particularly intended to serve neglected and marginalized segments of the LGBTQ community. “We identified an opportunity to resonate with younger, millennial readers – particularly those who are marginalized, like the transgender community, queer community and people of color.”

Into draws on the vast local knowledge of LGBTQ communities worldwide about their cities and attractions. The first issue includes a travel feature on an underground LGBTQ dance party in Tblisi, Georgia, the local community’s only outlet in the face of social repression; updates on the crackdown on LGBTQ individuals in Chechnya; and the inaugural monthly column by transgender interest column by activist Raquel Willis.

There are also profiles of LGBTQ, influencers like Perez Hilton, and coverage of the latest musical trends.

On the advertising side, Grindr and Into allayed potential advertiser concerns by emphasizing the magazine offers ad clients a brand-safe environment, unlike the pioneering mobile dating app, famous for its risqué content. That still leaves room for plenty of shirtless male beauty.

Last year, Grindr sold a controlling stake to Chinese gaming outfit Kunlun, which took a 60% stake in the gay dating app for $93 million.