'Mic' Lays Off Staff To Pave Way For Video 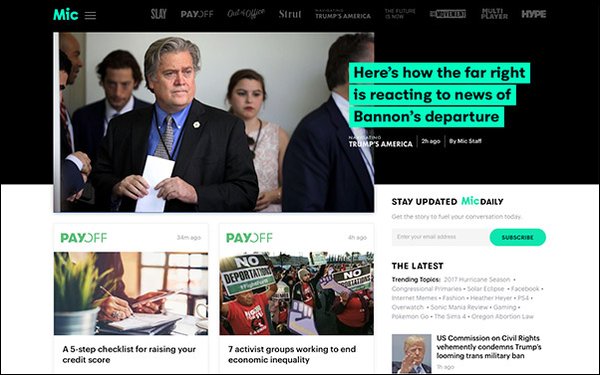 Mic laid off 25 employees Thursday as the company restructures to shift its focus to video.

The move is another “pivot to video” strategy by a digital media company, which has spread across publishers like Vocativ (which laid off its editorial staff to commit to video-only) and Vice.

“We made these tough decisions because we believe deeply in our mission to make Mic the leader in visual journalism, and we need to focus the company to deliver on our mission,” Mic cofounder and CEO Chris Altchek wrote in a memo to staff Thursday.

Roughly half of the layoffs affected Mic’s newsroom, hitting reporters and editors, as well as employees on Mic’s audience and analytics teams.

“Visual journalism already makes up 75% of the time that our audiences spend with Mic,” Altchek noted in the memo. “As new platforms emerge and existing platforms continue to grow, we believe this will become a dominant form of news consumption. Our strategy to realign our resources behind this new market of ‘tap stories,’ in which we are already winning, will set us apart.”

Mic said it will grow the company’s video team by hiring on-camera correspondents, producers and other visual journalists.

In early August, Mic publisher Cory Haik wrote an op-ed for Recode, noting: “...video advertising is becoming central to every digital media company’s revenue model. But along with the effects on advertising, we’re also massively misunderstanding a pretty critical shift in journalism itself.”

In November, Altchek told Business Insider: “People like video more than anything else.”

In a lengthy Twitter stream, Marshall said “pivot to video” is spin for publishers needing a new business model as expectations for digital advertising are not met.

“No site is ‘pivoting to video’ because of audience demand. Not even close. They are pivoting to video because the industry is in the midst of a monetization crisis,” he wrote.

In April, Mic raised a series C funding round of $21 million, bringing the company’s total funding to $52 million. At the time, Mic said the new funding will be used to expand Mic’s nine new verticals and video production.
employment, magazines, trends
Next story loading