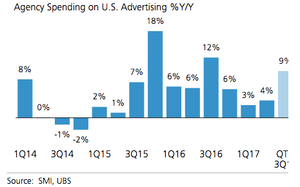 The U.S. ad marketplace fell to one of its seasonal lows in July, which vies with January as the lowest demand months of the year.

Demand fell to an index of 194 in July from a 217 in June, matching January’s 194 index as the weakest month of 2017, according to the US Ad Market Tracker, a collaboration of MediaPost and Standard Media Index based on a pool of actual media-buying data from most of the big agency holding companies.

That said, 2017 turned in the best July in the seven-year period that SMI has been reporting data for, increasing nearly 10% from an index of 177 in July 2016.

The erosion of demand in July happened mainly as a result of smaller brands, according to the data, which shows that spending among the top 10 product categories fell only 8.5%, while demand among all other categories fell 20.2% from July 2016.

While digital media followed similar patterns of seasonal demand, the overall momentum of digital media demand continues to expand relative to the rest of the marketplace. Demand for digital media turned in a market index of 599 in July, a gain of 20.1% from 503 in July 2016.

Demand for national TV time was among the weakest for any medium, which matches both seasonal norms as well as an underlying shift of marketing budgets into newer media.

“Our  conversations with ad buyers and sellers continue to indicate a soft TV advertising market and combined upfront/scatter pricing is still not quite covering commercial viewing declines,” the equities researchers at UBS wrote in a note to investors analyzing the SMI data this morning. “During second quarter 2017 earnings [calls], media management commentary was mixed with many citing continued strong demand and pricing but offset by poor ratings performance. While the third quarter of 2017 should benefit from easy Olympics comparisons (ex-NBCU) we see third quarter core US national TV advertising as a soft -0.7%, year-over-year.”

The UBS team said it believed the current softness in national TV ad demand is “more cyclical than secular, due to tough comparisons” with a relatively strong first half of 2016, which had more product launches, as well as weakness in retail and auto categories.

“The 2017-18 TV season upfronts have closed for the majority of major networks groups, and results were stronger than expected with volumes up low-to-mid single digits,” they observed, concluding: “Overall, by our math this suggests advertisers are budgeting a return to flattish advertising this coming TV season, improving from recent declines and contradicting the TV ad recession bear case.”