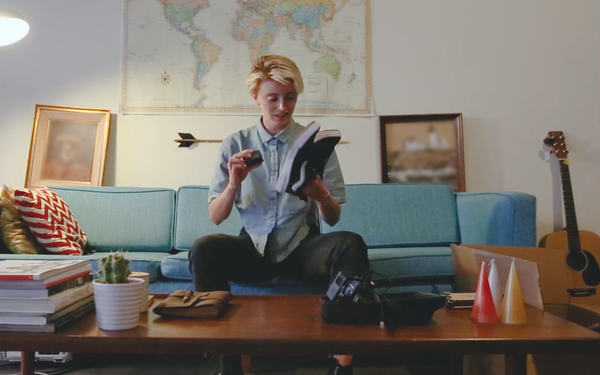 The campaign, using the hashtag #UltraRange, kicked off Aug. 17 and features photographers Laura Austin and Reuben Krabbe documenting their adventures wearing the shoes. The activation will unfold on Facebook and Instagram.

Each influencer receives a box containing a digital video camera, a journal, some very cryptic instructions, and a new pair of Vans UltraRange shoes. Each photographer will showcase the clues and questions presented to them and check in as they set out on their separate adventures to uncover their final destinations.

“Vans wanted non-traditional media to drive awareness, consideration and deep connectivity to the UltraRange," Abrams tells Marketing Daily. “Each of the campaign influencers we chose were professional creators on their own with a distinct style unique of Vans’s aesthetic.”

The goal was to create a digital visual collage of their experiences that are compiled into an ongoing documentary and digital adventure scrapbook that vividly illustrate what adventure looks like for people whose lives are dedicated to seeking it out, he says.

“This campaign provides a POV perspective of adventure that captures our explorers’ journey and product benefits with authentic storytelling, Abrams adds.  “The campaign combines a variety of types of media including social, digital and video with a strategic rollout of the content to keep our audience engaged with for the duration of the campaign.”

A former online editor at Snowboarder Magazine, Austin’s work has expanded into equal parts fashion, adventure and sports. Her camera captures everything from women on custom motorcycles to of-the-minute street fashion to hiking along emerald green ridges on the edge of Iceland.

Krabbe, an in-demand British Columbian bike and ski photographer, is best known for one of the greatest Powder covers of all time: A skier, silhouetted against a full solar eclipse. The ingenious shot required years of research to determine exactly where on the planet to be and when to be there.

Using the cameras provided and their own creative instincts, each will each create a digital visual collage of their experiences that GrindTV’s branded content team will compile into a three-minute “DIY Documentary,” a digital adventure scrapbook.

Through TEN’s network of distribution channels, “#UltraRange” will reach millions of active lifestyle enthusiasts. Social content, including a combination of video and photo uploads, will be distributed across GrindTV, additional TEN brands, and the subjects’ own social channels. Austin’s journey will also be featured on SUP Magazine, Canoe & Kayak and Kayak Fish Magazine, and Krabbe’s adventure will also be highlighted on Bike.