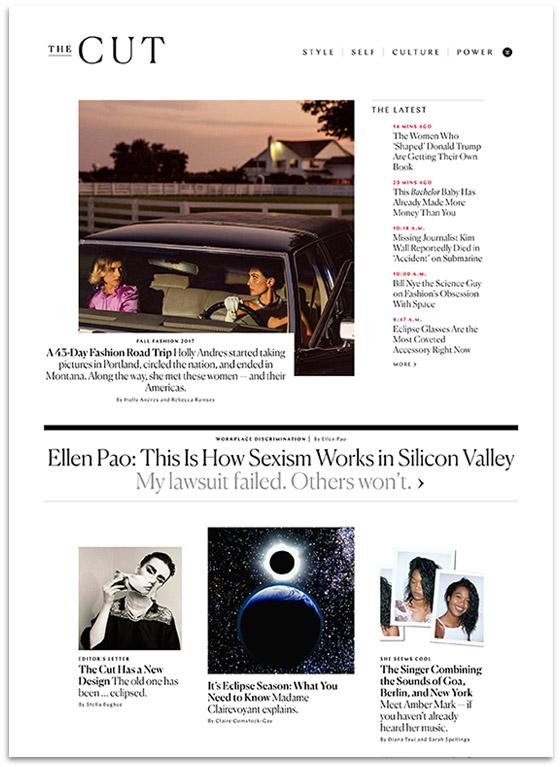 New York Media’s style site The Cut has undergone a redesign and announced new hires in its sales and video department.

The redesign is being touted as “mobile-first” and features a new logo and site sections, with more white space and “an emphasis on discovery for the homepage,” New York Media stated. It added the majority of The Cut’s readers consume its content on mobile.

The Cut launched five years ago as a standalone site, spinning off from New York.

The redesign brings “new prominence to coverage of feminism and politics, wellness and fitness, work and career, parenting and culture,” the company stated. President and editor-in-chief Stella Bugbee notes in an editor’s letter introducing the new site: “We felt it was time for the Cut to reflect how much we’ve grown along with all the conversations around us.”

The Cut's site is now divided into four new sections: Style, Self, Culture and Power.

Self “is our hub for everything that relates to our mental and physical health, feelings, sex, relationships and parenting,” she added.

Later this fall, New York's science and human behavior vertical Science of Us will begin publishing on the Self section of The Cut.

The Culture section of The Cut will focus on celebrities, movies, TV, music and books, while Power “houses our coverage of politics, feminism, work, money and issues relating to equality,” Bugbee wrote.

The new site also introduces more brand-integration opportunities, such as revamped branded content “to be more in line with the voice of the site," and high-impact ads for the mobile homepage, according to the company.

Saks Fifth Avenue and Cartier are among the redesign launch partners.

Last week, Jacqueline Cinguina and Kate Solinsky were appointed New York Media’s head of sales marketing and head of sales, respectively, working across the company’s suite of brands, which include New York, Vulture, The Cut, Grub Street, Science of Us, Select All and The Strategist.

Solinsky previously worked at the content discovery platform Outbrain, most recently as the head of agency sales.