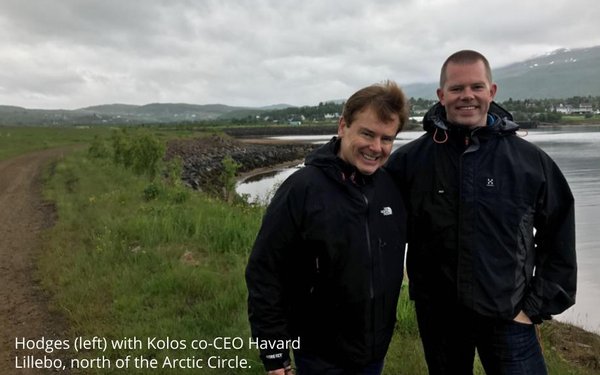 After decades pioneering the cable, online and mobile industries, Dan Hodges is leaving media to develop what he believes is the next frontier: data. Not the analysis of application of data, per se, but its storage. Especially in a sustainable way.

Hodges has become President of Kolos, a U.S.-Norwegian company with a goal of becoming the world’s largest data center.

Importantly, Kolos, based in Ballangen, a town in northern Norway, also plans to be ecologically friendly. Utilizing natural resources and renewable energy, the company’s plant is based 140 miles north of the Arctic Circle.

Hodges says his team researched the location carefully because it will enable a massive, climate-cooled facility that will also be powered by Norway’s abundant hydropower.

He says the plan is to create a capacity of 1,000 megawatts of computing power that will generate high-speed, cost-efficient data storage and processing capable of filling the world’s rapid data capacity needs.

Hodges -- who is well known in the ad agency, marketer and media worlds and a frequent contributor at MediaPost’s events -- will continue to be based in the U.S. Like the emergence of new media technologies in the 80s, 90s and new Millennium, he says data is the next new thing. And finding cost-effective, ecological-friendly ways of managing it aren’t just industrial imperatives, but global ones.

“In looking back over my career, I have made a major shifts every decade,” says Hodges, who began his career on Madison Avenue before becoming a key player in the development of multichannel television at Discovery Networks, and moving on to online and mobile media.

“Usually, no one understands why I would make a shift until about three to five years after I have made it,” Hodges notes, adding that the data center play has implications not just for marketing and media, but for AI, IoT, governments, corporations and NGOs.