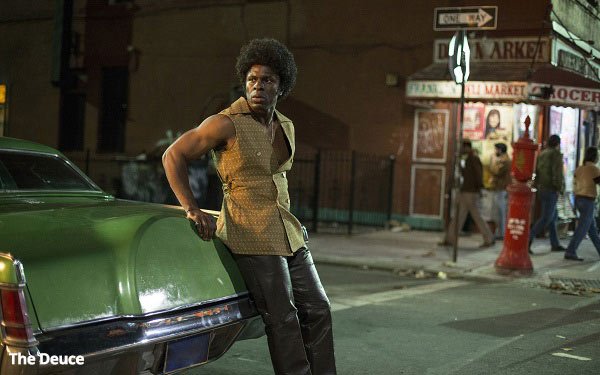 Those of us who grew up in the 1970s have another set of reasons to feel old now that TV has become obsessed with that decade.

However, except for some longer hairstyles, bellbottoms and the occasional appearance of a pair of sideburns on that show, that show was about the 1970s in name only -- like “Happy Days” and “Laverne & Shirley” supposedly taking place in the ’50s or ’60s. After a while, the time frames were beside the point.

Those shows were not exactly accurate depictions of those decades. More recently, however, a handful of TV shows has come along in which the attention to details is aimed at really immersing you in the era -- the recent season of “Fargo” on FX, in which one storyline involved flashbacks to the ’70s, and the upcoming “The Deuce” on HBO about Times Square in that decade.

The question is: Is an immersion in the ’70s really something anybody can benefit from? The answer to that question depends greatly on your age.

Speaking as someone who was there in person, I can’t see any reason for these repeat visits back to the decade of gas lines, double-digit inflation, Watergate and the ignominious end of the Vietnam War -- even if they were some of the best years of my life (which they were).

But the older I get, the more I realize that these bellbottom-and-sideburns re-creations of the 1970s in movies and TV shows are not for me at all. They are for the multitudes who were born long afterwards, and for whom the 1970s are as obscure as the 1930s or the 1920s were for me when I was growing up.

The impetus for this blog post about the current ’70s mania in movies and TV shows is the pending premiere September 10 of “The Deuce.”

The show, starring James Franco, is from the producer of “The Wire,” David Simon -- TV's bard of Baltimore (and later New Orleans with HBO's “Treme”) who is now turning his attention to the 42nd Street (known decades ago as “the deuce”) and Times Square locales of the 1970s.

As anyone knows who was alive then, the area was squalid and crime-ridden -- characterized by peep-show emporiums and live-sex theaters whose numbers exceeded the Broadway venues of the legitimate theater, which somehow still thrived in that seedy sector.

“The Deuce” purports to be a dramatization of the rise of pornography, which the show apparently posits got its start in New York City.

Whether this is accurate history or not is beside the point. What I find interesting is the continual attempts by TV and movie producers to reproduce the New York City that existed in the era before the city was greatly cleaned up and its runaway crime rates reduced, starting in the 1990s in the administration of Mayor Rudy Giuliani.

Younger people who know only the New York of (relatively) safe streets and a Brooklyn filled with hipsters in expensive apartments seem to have a keen interest in the world that came before that.

It's possible that many younger people feel they may have missed something vital and important because they were born too late. And maybe they did miss something.

Those of us of a certain age sometimes struggle with reconciling the anything-goes and much more dangerous New York City of our youths and young adult years with the bright, shining and polished Big Apple that it is today.

Back then you were in danger of being mugged every time you walked down a side street alone. And the subway trains were covered in graffiti both inside and out.

These conditions were not necessarily “better” than today, but we did have fun. Not too long ago, I decided that, for me, the best word for describing the nastier New York of the era before this one is “poignant.”

Yes, you could also apply words and phrases such as “rundown,” “dangerous,” “dirty,” “crime-ridden” and “graffiti-covered.” But “poignant” was the way I felt about it then and I still think about it that way now.

So the question for “The Deuce” would be: In lavishly re-creating this very era in cars, costumes and hairstyles, will the show be able to capture the poignancy of the era as well?

After all, the ’70s were a lot more than polyester suits and handlebar mustaches, weren't they?