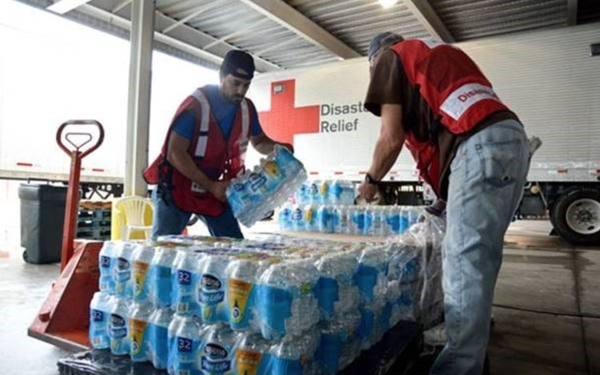 While Texas and Louisiana continue to reel in the aftermath of Hurricane Harvey, more companies are opening their coffers to help.

Companies have pledged $72 million to relief efforts as of late Wednesday afternoon, according to an estimate from the U.S. Chamber of Commerce, according to CNN Money. Forty-two companies had donated $1 million or more as of Wednesday. Verizon alone contributed $10 million.

Walmart reportedly is debuting a customer match program. A news release from Houston Mayor Sylvester Turner indicated that Walmart would debut a customer campaign with the American Red Cross in which the company would match up to $10 million for American Red Cross disaster relief, per CNN Money.

Amazon and Whole Foods previously announced they will match cash donations made on Amazon.com up to $1 million to the Red Cross Hurricane Harvey Relief.

Other large companies to make donations include Nestlé Waters North America, which has donated more than 1.3 million bottles of water to relief efforts. The suppliers are being distributed through partner organizations across Texas and Louisiana including Americares, the American Red Cross, Gleaning For The World, Convoy of Hope and Feeding America.

Mazda Foundation (USA), Inc. and Mazda North American Operations (MNAO) together are donating $100,000 to the American Red Cross Hurricane Harvey Disaster Relief fund. The Mazda Foundation and MNAO have been long-time partners with the American Red Cross. Through the partnership, MNAO is a $1 million member of the Red Cross Annual Disaster Giving Program, which helps ensure that the Red Cross has the necessary resources to respond to disasters large and small.

Toyota Motor North America (TMNA) is partnering with ToyotaFinancial Services (TFS), The Friedkin Group, Gulf States Toyota (GST) and Toyota and Lexus dealers nationwide, to provide a combined relief effort of over $3 million. The group’s relief efforts include funds to organizations such as the St. Bernard Project and American Red Cross, matching contributions, in-kind donations, volunteerism and the donation of pre-owned vehicles

Even local companies (who are affected by the storm themselves) are stepping up to help. Texas-based Del Frisco’s Restaurant Group will aid the victims of Hurricane Harvey with a goal to donate over $1 million to Houston-area food banks.

From Aug. 31 through Sept. 5, 20% of sales at every Del Frisco’s Double Eagle Steak House, Del Frisco’s Grille and Sullivan’s Steakhouse nationwide (53 restaurants in total) will be contributed with hopes to exceed $1 million in donations.