The 30-page report by NYU Steinhardt Music Business Program Director Larry Miller, which was first reported Thursday by Variety, can be accessed here.

The report centers on radio's inability to connect with younger listeners -- especially millennials and so-called “Generation Z” cohorts who grew up in an era of abundant digital audio alternatives to terrestrial radio broadcasting, as well as the failure of the radio industry to respond quickly enough to the newfound competition.

Among other things, the report notes that one of radio’s strongest technological bases -- the automobile -- has begun to erode thanks to the introduction of digital audio receivers competing with or supplanting conventional terrestrial radio devices in many new car models.

While Miller’s report also makes an explicit attack on the validity of Nielsen’s radio audience measurement, noting that “radio’s ratings system can be gamed and fails to deliver on the specifics that advertisers demand,” Nielsen issued a statement refuting those observations.

The Nielsen statement points out that its radio measurement methodology continues to be “the industry accepted currency for the buying and selling of radio advertising,” and links to the recent findings of its Total Audience Report showing that younger radio audiences have been stable:

“In Nielsen's latest Total Audience Report 2017, Q1 data shows that Generation Z spent over 35 hours per month listening to AM/FM radio and 88% of Generation Z use radio each week. Meanwhile, Nielsen’s Ethnic Audio Today report cites that nearly 75 million weekly radio consumers are Black and Hispanic - up from 73 million a year prior.” 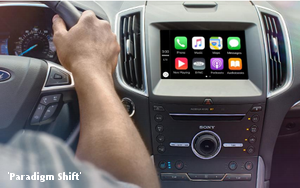