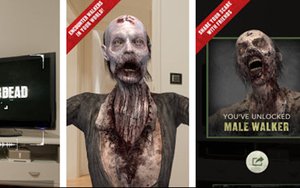 To mark the upcoming 100th episode/Season 8 opener of “The Walking Dead,” Mtn Dew has teamed with AMC to offer an augmented reality app.

“The Walking Dead Encounter” app, created by Trigger, will let consumers experience some of the show’s most popular zombie walkers in their own real-world environments and share the interactions via social media.

More than 100,000 products featuring images of show characters Rick Grimes, Michonne and Daryl Dixon will be in stores prior to the new season’s opener on Oct. 22.

App users can use the “Create a Scene” mode to collect a walker, compose a scene with friends, and record the scene as a photo or a video; share the work via exporting to Facebook, Messenger, Twitter and other channels; scale and rotate the walkers in their personal “Walker Gallery”: and get instant notifications on new walkers to unlock and upcoming episodes, according to the Google Play site.

“The Walking Dead” has been the #1 show among viewers 18-49 for the past five years.

“We are always looking to form partnerships that will deliver one-of-a-kind experiences to Dew Nation,” said Chauncey Hamlett, senior director of marketing for Mountain Dew. “By partnering with AMC and the incredibly successful ‘The Walking Dead’ series, we’re bringing together two of the most passionate fan bases in the country.”