T-Mobile Announces 'Netflix On Us' Partnership 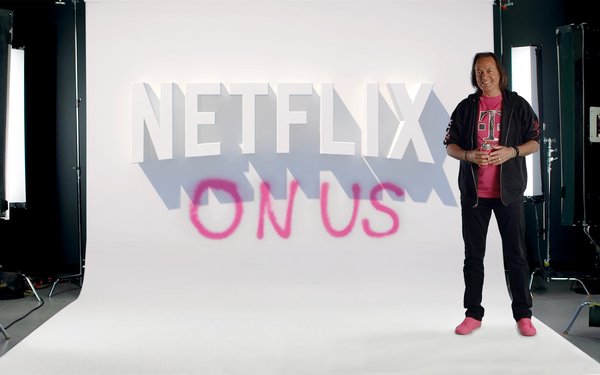 It’s nearly autumn, and that generally means it’s time for another “Uncarrier” announcement from T-Mobile.

In its latest move, the wireless carrier is linking with Netflix, offering to provide the streaming service’s basic subscription at no extra cost for those who subscribe to T-Mobile One family plans (which involve two or more lines). T-Mobile announced the partnership with a video featuring CEO John Legere using magenta spray paint to write the words, “On Us” under Netflix’s familiar white programming logo, and then dropping the spray can like a microphone.

The offer applies not only to new customers, but also to current One family plan holders. In announcing the plan, T-Mobile executives characterized the move as breaking up the “carrier bundle,” which involve offering additional services and speeds for additional costs (or through short-term promotions that expire and then involve costs). T-Mobile executives said the Netflix partnership comes with no strings attached and is currently exclusive to T-Mobile customers in the United States.

“[Bundling] has been [wireless companies’] core strategy for years: take something you want, and put it together with something you don’t want, and then put it in a bill that explodes,” Legere said. “It really is just another scheme to shake down customers. It’s a huge pain point, and it needs to be ‘Uncarriered.’”

For the promotion, T-Mobile will cover Netflix’s Standard $9.99 monthly subscription. Customers seeking to be a part of Netflix’s Premium plan ($11.99 a month) will see the extra $2 tacked onto their phone bills. Current Netflix customers who are on, or switch to, a qualifying T-Mobile plan will simply need to link their Netflix and T-Mobile accounts to begin the payments.

“This is the right move at the right time — for all the right reasons,” said Reed Hastings, co-founder and CEO of Netflix, in a statement. “More and more fans are bingeing on mobile, so we’re bringing together Netflix’s award-winning TV shows and movies with T-Mobile’s award-winning, unlimited network.”

In addition to easing a consumer pain-point, T-Mobile executives said the deal is also a vote of confidence in the company's network. They assert that AT&T’s and Verizon’s networks have been struggling under increased usage from unlimited data plans. T-Mobile’s network, they claimed, is ready to take on the increased data that comes with many users streaming Netflix video.

“All the content in the world that the other guys have — or will have — doesn’t mean shit if your network can’t handle it,” Legere said. “We are giving unlimited network and 'binge-on' to our customers because our network can handle it. … This is a celebration of our network, and another one in a series of taunts to our ‘friends.’”

T-Mobile will begin promoting the “Netflix on Us” availability (which begins Sept. 12) through a television ad (below) that features the two companies’ audio signatures running back-to-back before moving into scenes from some of Netflix’s most popular shows (“House of Cards,” “Unbreakable Kimmy Schmidt,” “Stranger Things”) and the promotional details. T-Mobile will also be hosting an all-day “meme-a-thon” on Twitter, in which T-Mobile customers will be encouraged to answer questions posed by the company using Netflix-related memes. Prizes during the “meme-a-thon” include T-Mobile onesies, smartphones and an expenses-paid trip to the season two premiere of Netflix series “Stranger Things.”