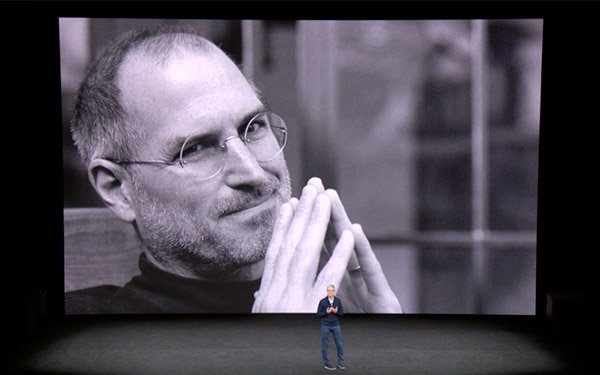 Apple executives once again took to the stage yesterday to unveil its new devices and operating systems in the new Steve Jobs Theater on the Apple campus. They unveiled, as expected, both the iPhone 8 and the fancier, pricier iPhone X, Apple TV 4K, new operating systems and an Apple Watch 3 that gives surfers the ability to take or make a call while waiting for the perfect wave on Redondo Beach.

Opening with the Beatles’ “All You Need Is Love” and shots of the thousand or so journalists who covered the event arriving at the stunning subterranean auditorium, the reveals were streamed live worldwide.

“Apple’s iPhone launch began with a moving tribute to the company’s late founder Steve Jobs — and ended with a talking poop emoji,” writes Tim Bradshaw for Financial Times. “The two hours in between saw the biggest leaps forward for the iPhone in years…. The event’s juxtaposition of sentimentality and frivolity speaks to the balance that Apple must strike between extending its record of breakthrough technology and delivering the crowd-pleasing features that will persuade millions of people to pay $1,000 for its new iPhone X.”

“It sums up the tightrope walk that Apple faces at these events,” CCS Insight analyst Geoff Blaber tells Bradshaw. “They are trying to appeal to consumers who are watching the keynote, investors and partners in the industry.”

Not everyone was impressed.

“Excruciating self-congratulation has always been part of Apple’s brand, but the company took this to new levels at today’s iPhone event,” writes James Vincent for The Verge. “It started with a tribute to Steve Jobs that was unnerving in the depth of its veneration…. And then things got really crazy.” Like, for instance, its decision to call its stores “town squares.”

And, as Karen Hao points out for Quartz, Angela Ahrendts, Apple’s senior vice president of retail, was the only female executive to make a presentation.

“The only other women to even make an appearance were Deidre Hollars Caldbeck from the product marketing team — she called in from a paddle board during the Watch series 3 demo — and … Siri, who scored a fleeting cameo.”

Siri is reportedly getting better — “more human” that is — in the upcoming OSes.

There are many roundups covering all the the upgrades and other, less major new products, including Lisa Eadicicco’s compilation for Time and Wired’s liveblog. Shelly Palmer tells you “everything you need to know” about the iPhone X that starts at $999 and has facial recognition, edge-to-edge display, the most durable smartphone glass ever, a new OLED display and is pronounced “iPhone Ten.”

Palmer, among others, is impressed by the announcement about the forthcoming “town squares” saying they “will take experiential marketing to the next level. The stores look simply amazing.”

Ahrendts made the announcement about the new retail concept wearing  “a knee-length pale pink macramé lace trench coat which costs $2,895 and is made by British fashion house Burberry, as Business Insider’s Avery Hartmans, among others including Vogue, Racked and W, points out. Ahrendts was previously Burberry’s CEO.

“We think of Apple Retail as Apple’s largest product,” Ahrendts told the assembled and tuned-in.

“The goal is to make Apple stores forums for collaboration,” writes Natalie Gagliordi for ZDNet. “The new, reimagined Apple … will include the new Genius Grove, which is essentially a redesigned Genius Bar, as well as a new in-store experience called ‘Today at Apple.’ Meanwhile, new Creative Pro employees will be on hand to help bring ‘Today at Apple’ to life, Ahrendts said.

Even as we become more immersed in our devices, physical spaces seem to be taking on added missions and enhanced elegance.

The Steve Jobs Theater, according to the San JoseMercury News, has leather seats that are said to have cost as much as $14,000 each, as well as a product demonstration room.

“The theater is built on a hill on the southeastern end of the 175-acre campus near North Tantau Road. In a Wired magazine feature on Apple Park, Apple CEO Tim Cook said the theater is perched on the hill as a tribute to Jobs, who elevated Apple as the most profitable tech company in the world and died in 2011 at the age of 56,” Seung Lee writes.