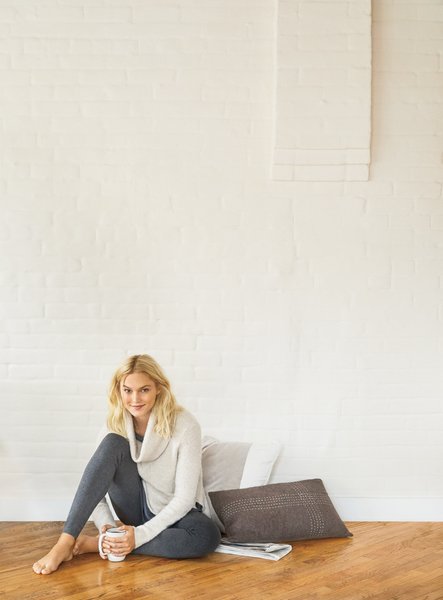 Lands’ End, still smarting from the hand slap it got from consumers for trying to be chic, is rolling out a leisure collection it says is like a big hug. Kind of.
The apparel company is calling the campaign “The Art of Cozy,” and says it’s based on the trendy Danish word hygge, which means comfortable and cozy. (It’s also the root word of hug.) And for Lands’ End, it’s an opportunity to try and recapture some casual customers: The collection reinvents classic sweats by using heathery-grey knits, nubby sweaters and cold-weather cardigans.
The new line comes as the Dodgeville, Wisc.-company is regaining its footing after last years’ ouster of Federica Marchionni. With a resume that includes the likes of Dolce & Gabbana and Ferrari, her rocky 19-month tenure ended last October. Since then, the company has halted the more fashion-forward “Canvas by Lands’ End” line, one of her key initiatives. And in a conference call announcing the results, CEO Jerome S. Griffith says the company is paring down the New York fashion office and consolidating its design staff in its Midwestern office.
Last month, it reported its first sales gain in three years, with revenues rising to $302.2 million, compared to $292 million in the same period last year. Sales in the direct segment climbed 5.5% to $259.9 million. But retail sales sank 7.4% to $42.2 million, a decline it says is mostly due to fewer Lands' End Shops at Sears. (Lands’ End spun off from Sears back in 2014.) On a same-store basis, sales improved 3.8%. And it says e-commerce sales climbed in the double digits. Its losses widened though, to $3.9 million, compared to losses of $2 million in the year-ago quarter. (Some of that stems from costs due to reducing its New York office.)
Hygge made it onto the shortlist of the Oxford Dictionaries’ “word of the year” last year, and defines it as “a quality of coziness and comfortable conviviality that engenders a feeling of contentment or well-being,” and  "The New Yorker" reports its led to a coziness craze, including books like “The Year of Living Danishly,” “How to Hygge: The Nordic Secrets to a Happy Life,” and “The Book of Hygge: The Danish Art of Contentment, Comfort, and Connection.”