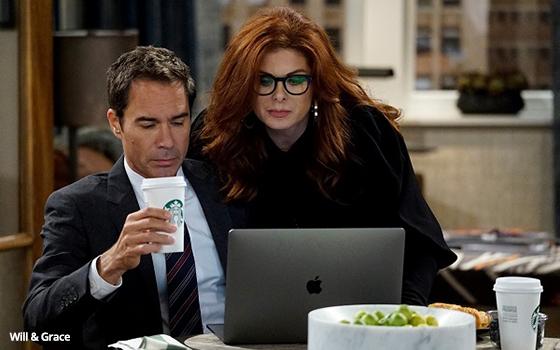 Today's TV Blog photo is brought to you by Starbucks and Apple.

That's Eric McCormack holding a Starbucks coffee cup in the photo, which is a publicity picture provided by the NBC p.r. department for the new “Will & Grace,” premiering next Thursday.

There's another Starbucks cup at right that should have been positioned better, with the logo side visible. And as you can clearly see, McCormack and co-star Debra Messing are jointly engrossed in whatever they are seeing on the screen of an open Apple Macbook.

Welcome to the new fall TV season, where “catch the product placement” has the potential to become a new drinking game.

The presence here of the Apple-branded laptop had me wondering if all of the shows on TV today featuring genius computer whizzes have been created for the purpose of offering exposure to computer marketers and their logos. I’ll drink to that.

“Will & Grace” is one of the more notable premieres scheduled for next week (Thursday on NBC) as another new fall TV season gets underway in earnest on Monday.

It's one of at least three “new” shows coming up on good ol’ network television whose titles will sound familiar. The other two are “S.W.A.T.” on CBS (premiering November 2) and “Dynasty” on CW (October 11).

A smattering of shows have already premiered -- “The Orville” on Fox and the new season of “Dancing With the Stars” on ABC this week.

Technically, the first show of the “official” fall TV season will be “Young Sheldon,” the “Big Bang Theory” prequel spinoff that premieres Monday (September 25) at 8:30 p.m. Eastern on CBS.

It's one of the more fanciful concepts adopted for the new shows the networks will introduce starting next week.

NBC has three new fall series, including the aforementioned “Will & Grace” and another “Law & Order” -- “Law & Order: True Crime,” premiering Tuesday (September 26). NBC also has “The Brave,” starting Monday night -- one of three War on Terror dramas coming to network television this fall.

CBS has the two aforementioned comedies plus another one -- “9JKL” premiering October 2. The title refers to three adjacent apartments in New York.

“Ten Days in the Valley,” a serial in which various characters harbor secrets (including the lead character played by Kyra Sedgwick), starts October 1.

The fourth one, awkwardly titled “Kevin (Probably) Saves the World” (October 3), seems kind of like the old “Oh, God!” movie in which an ordinary man encounters an angel or some sort of divine entity and is then reluctantly recruited to go forth and try and save either the world or some of the people in it. Jason Ritter plays the guy.

ABC's sole new comedy is “The Mayor,” about a young African-American rapper who accidentally gets elected mayor of a small city. Uh-oh! “The Mayor” premieres October 3.

Fox has the aforementioned space show “The Orville” plus a Marvel-inspired drama of its own, “The Gifted” starting on October 2. Fox has one new comedy too -- “Ghosted,” about a pair of L.A. ghostbusters. It starts October 1.

CW has the aforementioned new update of “Dynasty” plus the third of TV’s terror-fighting dramas, “Valor,” starting October 9.

New shows are always fun when the fall season comes around. But it is also worth noting that “The Simpsons” starts its 29th season October 1 on Fox. D’oh!